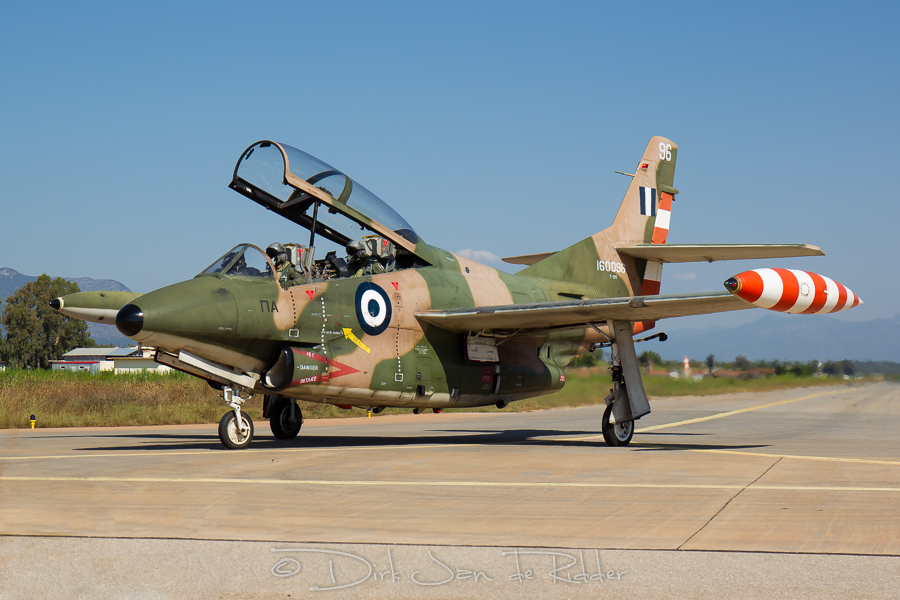 The Hellenic Air Force established the 120 Air Training Wing with T-33 Shooting Stars and T-37 Tweets at Kalamata airbase in 1970. The T-33, used in the advanced flying training role, was replaced by the North American T-2 Buckeye in 1976, the latter of which is still going strong 40 years later. After the retirement of the Buckeye from the Venezuelan Air Force in 1999 and the United States Navy in 2015, the Hellenic Air Force became the final operator of the type.

The 120 Air Training Wing currently consists of four flying squadrons plus the Sea Survival Training Squadron. Basic flying training on the T-6 Texan II is offered by 361 and 364 Mira (squadron). The T-2 Buckeyes form part of 362 and 363 Mira. A couple dozen T-2s remain in service, but only a small handful seem to be airworthy at any time. During my visit, over the course of three days only two Buckeyes were seen flying, each logging some three to four sorties per day. One time a third aircraft was prepared for flight, but it went tech and no spare jet was used to complete that sortie. With the aircraft flying from sunrise to sunset every day, it seemed like demand for flying hours was greater than could be realised. 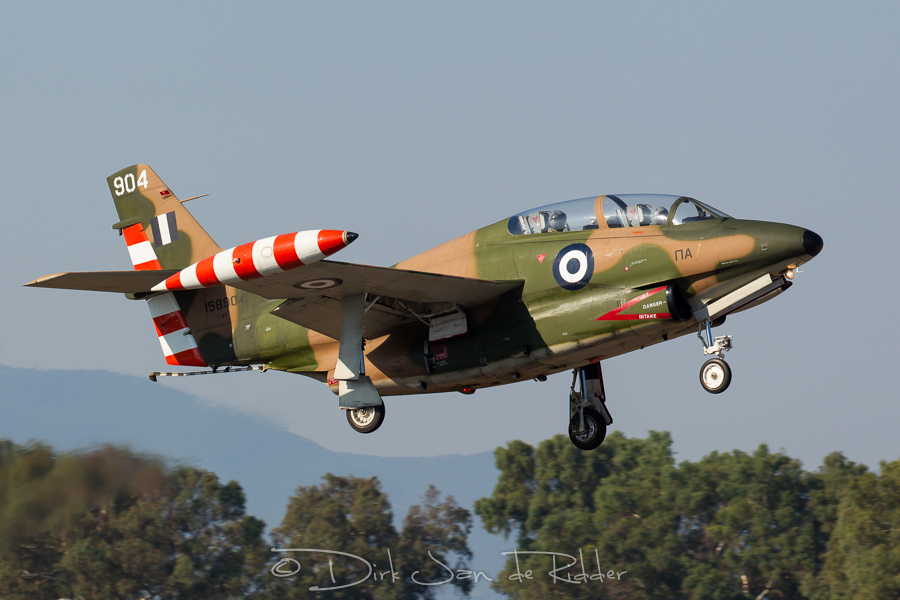 Future Hellenic Air Force fighter pilots start their career at the HAF Academy in Tatoi, where they receive university education, military discipline and basic flying training. After graduating, they continue flight training as a second lieutenant at the 120 Air Training Wing for up to two years. After completing phase 2 training on the T-6 Texan II, student pilots continue their training at either 362 or 363 Mira for phase 3 and phase 4 training.

Phase 3 comprises ground school and flying the T-2 Buckeye for some 80 hours, of which 20 in the simulator. At this stage pilots are selected for either fighter jets, helicopters or multi-engine transport and patrol aircraft. The latter two groups continue their training at Elefsis. The majority of trainees are selected for fighter jets. They continue to fly the Buckeye for another 60 hours, during which they get an introduction into operating their aircraft in a tactical sense. This mainly comprises air-to-ground training with simulated weapons. 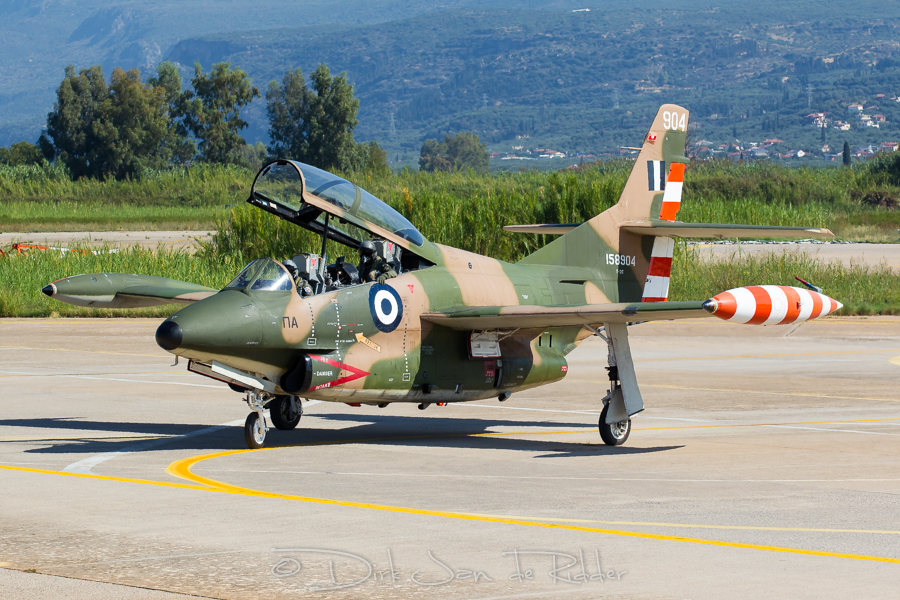 The 120 Air Training Wing began a long-term cooperation with the Italian Air Force in 2009. All courses are now given in English and several Italian instructors and students form part of the training wing. Some Greek students get their phase 3 and phase 4 training at the Italian Air Force’s training base of Lecce. Phase 3 lets them fly the MB339CD, while the introduction to fighter fundamentals phase is flown on the brand new M346 Master.

The majority of maintenance work is carried out at Kalamata. The T-2 is relatively easy to maintain with important components like the engine directly accessible at waist level, without the need for a stepladder. Being the last T-2 operator since September 2015, the Hellenic Air Force has acquired a large amount of spare parts from the US Navy and the Aerospace Maintenance and Regeneration Group (AMARG) in order to ensure that it’s T-2 fleet remains airworthy into the future. 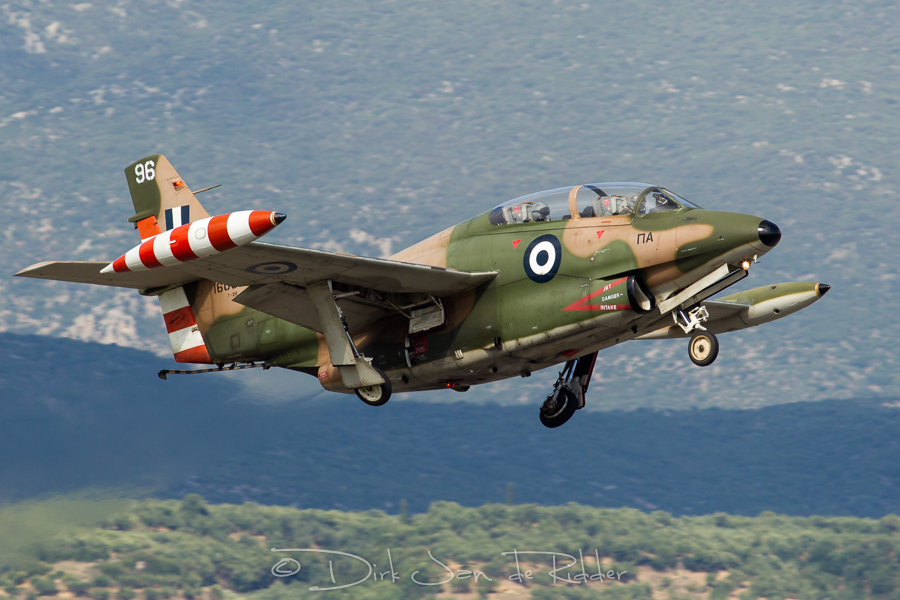 The Hellenic Air Force personnel’s bond with the charismatic T-2 and the hard work performed to keep it in good condition cannot prevent the aircraft from being retired in the near future. Another reason to replace the type would be the fact that the T-2 has very little cockpit commonality with the Hellenic Air Force’s fourth generation fighter jets. The main question however will be how to fund purchasing or even leasing a new training jet. It seems inevitable that the Greeks will have to soldier on with this classic training jet for as long as they are able to get the required spare parts.