F 21 ‘Norrbotten Wing’ at Luleå airbase has a long history of operating fighter aircraft mainly in the reconnaissance role. Established during the second World War, the fighter wing operated aircraft like the Fieseler Storch, P-51 Mustang and DeHavilland Vampire during the first decade of its existence. It has relied on indigenously built aircraft from the mid-1950s and with the advent of the Saab Lansen in the early 1960s and later the Draken and Viggen, it adopted the air defence role as well. F 21’s roles shifted from reconnaissance and air-to-air to multirole when the first Jas 39A/B Gripens arrived in 2002. They were replaced with the more modern and NATO-compatible Jas 39C/D from 2006.

Luleå is one of the most northerly located fighter bases in the world, at only some 100 kilometres (65 miles) south of the Arctic Circle. Despite its remote location and Sweden’s neutral and non-aligned position, F 21’s focus is very much on the rest of the world. F 21 wing commander colonel Carl-Johan Edström explains: “We have several areas that are really affecting the way we have to train, in order [for us] to be able to face those threats and the missions that we are supposed to carry out. To the south of Europe that is of course the situation in Northern Africa and the Middle East. What happened in Crimea will affect how we see ourselves. It shows that Russia is willing to use military force to get their political will.”

”We have a lot of personnel and material in the [Baltic Sea] area doing QRA missions on a day-to-day basis. There are a lot of big exercises going on in this area, both from our side and the Russian side. We also have to monitor the progress of the Baltic region. If something happens in the Baltic area, we cannot stand outside that crisis. We will be dragged into it in one or another way. And finally, there is the arctic environment. We have a lot of interests from both Russia, the US and the [Scandinavian] countries up here, because of geopolitical interests. It is one of the only ways out to the Atlantic Ocean for the Russian fleet. To be able to operate in the arctic environment in the cold, with snow and darkness, is a skill that we have, but we used to have a higher skill ten or twenty years ago. We are trying to regain that skill.” 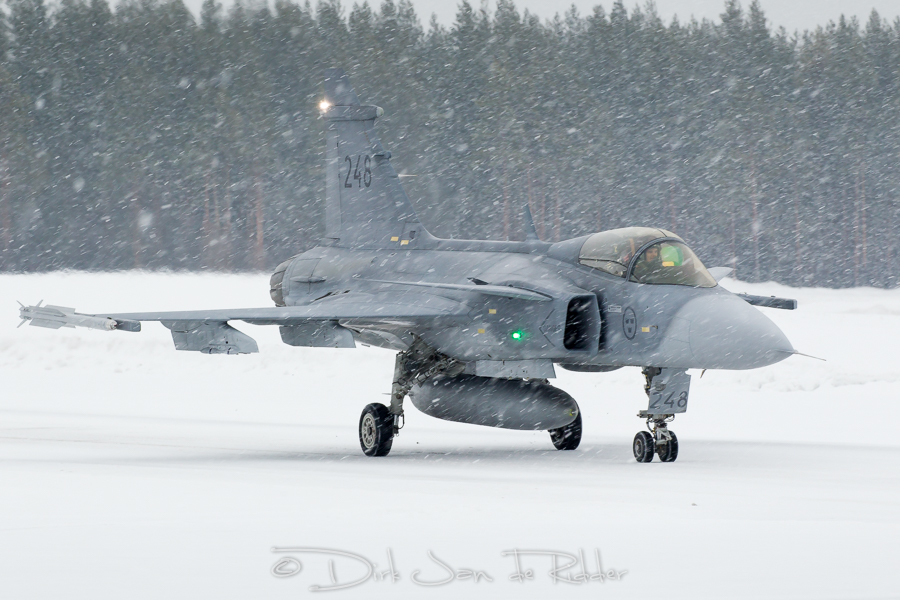 During the peak of winter the sun only rises above the horizon for 3 hours per day, presenting plenty of opportunity for night flying in winter during normal operating hours. During summer, it is the other way around. The sun will set at midnight and rise an hour later. This presents unique challenges and opportunities, as lieutenant colonel Anders Gustafsson, commanding officer of 212 squadron, explains: “We fly more night sorties [than the other fighter wings] due to our winter because some of the sorties during regular working hours are more or less night sorties. We also have compressed campaigns where we fly [exclusively] during night hours to get the best training environment for night ops. During the summer period it is never really dark, so we train night flying a lot in the winter period. It is sufficient to train it during that period when the circumstances are good.”

One of the other challenges of operating so far up north is the weather. Luleå is normally covered with snow until at least April. F 21 shares the airfield with a civilian airport located on the other side of the runway. The runway itself and the taxiways on the eastside are kept free of snow because civilian aviation regulations require it, but the taxi track on the military side is normally left the way it is. In times of crisis it might be necessary to operate in these conditions, so pilots better be used to them.

During my visit at the end of winter, the morning sorties were cancelled due to fog. Around noon, it started to clear up and the afternoon sortie was good to go, but when the sorties were about halfway completed, fairly intense snowfall required the jets to return early. Lieutenant colonel Gustafsson describes the weather conditions: “Winter weather can be really cold and really dark with snowstorms, but it can also be crispy weather with blue skies. Then it is just fantastic, easy flying. It differs a lot and it can suddenly change, but our met officers are quite good and it doesn’t happen often that we will be surprised. The aircraft works really good in the coldness we have up here. In peacetime we have some limitations, but that is just for the crew. When it is really, really cold it is harder to work and maintenance guys’ hands may get frozen, so we think about the crew instead of the aircraft. We have a limitation that we normally don’t fly if it’s colder than minus 25 degrees [Celsius]. We can do it if it’s something we need to do, but when it takes a while for the SAR helicopter to arrive, you can actually freeze to death quite quickly.”

The number one key feature of F 21’s location so far up north is the proximity of the massive training area at a mere five minutes flying. The airspace available for training is four times larger than that of Red Flag at Nellis and it has very few restrictions. Colonel Carl-Johan Edström: “We can train everything up here. The airspace is the facilitator for big exercises like ACE [Arctic Challenge Exercise]. The standoff distance of new air-to-air missiles brings up a big need for very big exercise areas. If you look at the Red Flag training area and you start to use the Meteor and the latest AMRAAMs, then it actually is too small if you want to use the maximum standoff distance. This is one of the few overland areas in Europe where we are able to train full-up scenarios with modern air-to-air missiles. An exercise like Frisian Flag [in the Netherlands] is great, but its live firing area is about as big as the small ones we have here. We have five or six of them in this area and then we have three much bigger areas. The airspace when we’re doing these big exercises goes from the ground to unlimited. That makes it possible to train full-up tactical operations. The United States have shown interest in our training area, but also in the Cross-Border Training [CBT] exercises that we hold with Finland and Norway.”

One of the measures to face the increasing security challenges is the reintroduction of road-based operations, originally developed in the 1930s. It was more or less disbanded after the Cold War, but times have changed. In March of last year, a Jas 39C piloted by lieutenant colonel Gustafsson operated out of a forward operating location (in Vidsel) for the first time in a long while. The goal was to evaluate a new concept of operating a unit consisting of one aircraft, one pilot and six technicians equipped with just two modified vans and a fuel truck. Lieutenant colonel Gustafsson explains: “We didn’t get rid of our road-based skills, we just haven’t used them that much. What we did in Vidsel was a new concept together with maintenance [personnel]. We are starting to build it up again and we will increase to use it. It is part of our concept to spread our resources and use whatever hard area we can land on and start from. It will be applied all over Sweden. It is not exactly the old system, but the idea to spread our resources is absolutely the same. What we need is a minimum length and width of a strip. That could be a road or a hardened area. It has been a while since we frequently did it in Sweden, but we will increase to do it. The Gripen is a really good aircraft to land. It is more or less built for this kind of operations, just like the old Viggen. I was a Viggen pilot before and that was heavier and harder to land on war bases or road bases. The thrust reverser was a good thing about the Viggen, especially during winter operations, but the Gripen is much smoother and easier to land. Apart from getting down there, the whole system with its quick turnaround time and easy handling for the crew makes the Gripen so useful for these operations. The maintainers can reload and refuel really fast and then quickly we get airborne again.” The aircraft can allegedly be refuelled and rearmed in less than 10 minutes for an air-to-air mission and less than 20 minutes for an air-to-ground mission, but he would not confirm that.

The biggest improvement for F 21 in the coming years will be the arrival of some 20 newly-built Jas 39E ‘New Generation’ Gripens. Although the newest Jas 39Cs were delivered as recently as two years ago, the Swedish Air Force ordered 60 new Jas 39E airframes to either replace or partially replace its current Gripen fleet. There have been discussions about whether the Jas 39C should bow out of service. LtCol Anders Gustafsson about that: “We will buy 60 new Echo versions, single seaters, and it has not been decided that we should go down to 60 aircraft. As far as I know, the last decision was that we should have 100 aircraft. What will happen, I don’t know, but we will have C/D versions flying until we have the Echo version operational. They are still good aircraft, but the Echo is much more advanced and in this area you need to always be in front. If you look into the future, you need the Echo version.”

“There are many things we are looking forward to. Compared to the C/D you can take more load, it has more stores, AESA radar, better sensors, more fuel capacity and so on. The electronic warfare system in this aircraft will be very good. Also, the architecture of the software system is really good I think, because for the first time they separated the flight safety parts of the aircraft from the tactical [parts]. That means that you can actually change and adapt the tactical systems and the fusion systems much faster and adapt to whatever happens. You can develop the aircraft much faster and I think that is really important. In all the Saab aircraft I’ve flown in, the human-machine interface is really good and I’m looking forward to what the Swedish Air Force will do with one big screen or three screens [in the cockpit].” Another feature he did not mention, but will be interested in is the Jas 39E’s ability to supercruise, fly supersonic without using afterburner. When asked about the possibility of the Swedish Air Force operating the Jas 39C alongside the Jas 39E and whether pilots would be able to be dual-qualified, he remained pretty clear: “I’ve flown the Viggen and the Gripen and I think the good parts will remain, so I would say it would be workable for pilots, but I don’t think it will be necessary. A squadron will retrain and then they will have the Echo and then another squadron continues, so you should probably concentrate on one aircraft.”

A full report appeared in several magazines, including in AirForces of the World: