Alpnach has been the Swiss Air Force’s main helicopter base since the first Alouette IIIs were delivered in 1964. It is home to Lufttransportgeschwader 2 (Air Transport Wing 2), which comprises Lufttransportstaffel 6 and 8 (Air Transport Squadron 6 and 8), both of which are equipped with the Eurocopter (now Airbus Helicopters) AS332 Super Puma, AS532 Cougar and EC635.

The Alouette III having set such high standards, the EC635 had a big job ahead of it to replace it, but it has been a success story from the very beginning. Within four years after the contract was signed in April 2006, the Swiss Air Force reached the full operational capability milestone. The transition to the EC635 went so quick and smooth that eight Alouettes destined to continue to fly until 2012 were retired two years ahead of schedule. 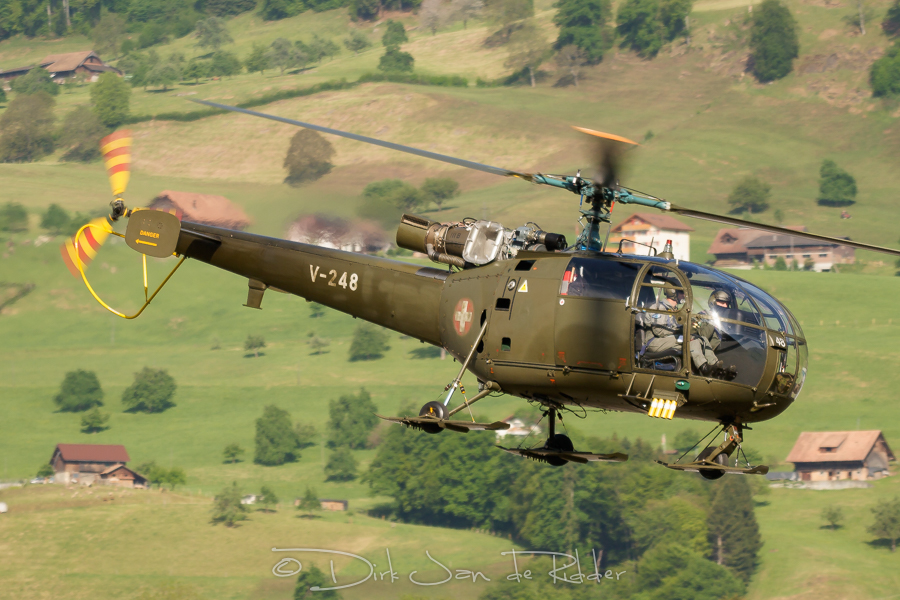 In July 2016, the EC635 fleet logged its 50,000th flight hour. In comparison, the slightly bigger Cougar/Super Puma fleet logged its 100,000th flight hour around the same time, having been in service since 1989 (Super Puma) and 2001 (Cougar). Pilots are extremely satisfied with the EC635’s performance and easy servicing. The helicopter has basically exceeded all of their expectations. One of the only drawbacks they could think of is that the EC635 is a bit more sensitive while flying with crosswinds due to its large tail fins.

A bigger drawback from their perspective is the fact that only 20 helicopters were purchased to replace 84 Alouette IIIs. They were quoted saying that many hours are spent flying in support of civilian authorities, especially the border guard, leaving few helicopters available for their own operations. Having 3 helicopters in maintenance at any time, up to seven reserved for pilot training at Alpnach and the remaining eight EC635s divided over three bases, requires good planning to satisfy all parties.

The EC635 is much more efficient than the Alouette III, with each EC635 flying some 350 hours every year and requiring less maintenance. At 500km (300 miles), its range is similar to the Alouette III, albeit with a larger payload. It is also capable of flying in weather circumstances that would have otherwise grounded the Alouette III. Apart from pilot training and support to civilian authorities, the missions of the EC635 include passenger transport, VIP transport, transporting internal and external loads as well as firefighting with a 400 liter bambi bucket. 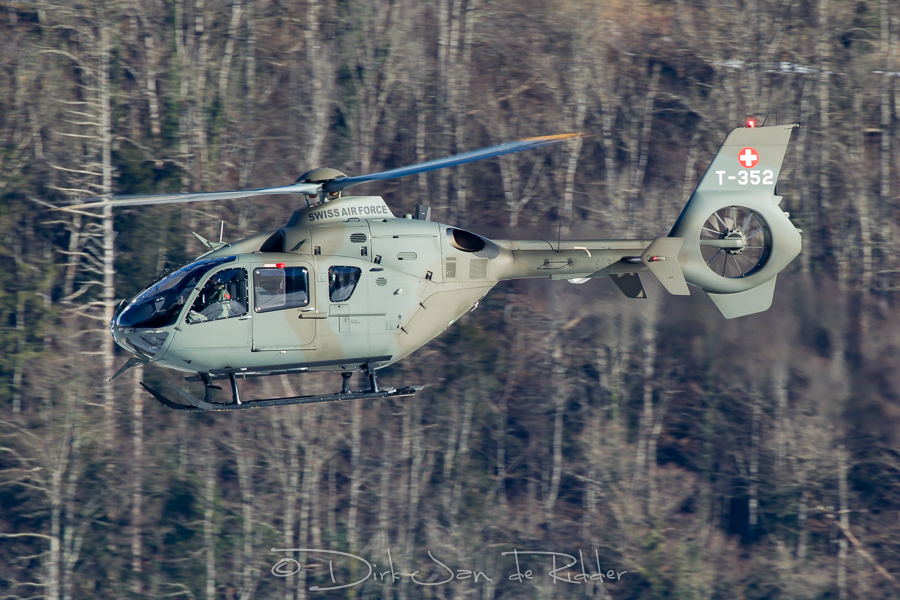 The EC635 is relatively easy to fly for both inexperient students and pilots on Cougar/Super Puma, so each pilot will ultimately be dual-qualified on both helicopter types. Once they have made the transition to the Cougar/Super Puma, they fly both. Some of them are even qualified on the PC-6 or PC-7 as well. Major Sebastian Hanimann, the squadron commander of Lufttransportstaffel 8: “Since our air force is relatively small, our helicopter pilots are fully trained on all helicopter types. One of the reasons that the EC635 was selected [to replace the Alouette III] is that its cockpit layout is very similar to the Cougar and Super Puma. This enables pilots to fly all types without much difficulty.”

“Students deal very well with the EC635. The integrated training mode is great. We use it to simulate engine failures, which is also valuable for experienced pilots. During such a training event both engines run with reduced power, but the instruments indicate a failure on one engine and it feels like a real engine failure. There is even a torque change with a slight movement around the vertical axis and when you apply too much power the rotor’s rpm [revolutions per minute] drops. In case of a dangerous situation, the training mode will automatically turn off, so that the pilot can use the entire engine power again.”

With a large part of the country consisting of mountainous terrain, Swiss pilots face unique challenges even during basic flights. Unpredictable weather conditions and unexpected wind direction changes between the mountains require them to be trained to the highest levels. Lieutenant colonel Ruedi von Flüe, a very experienced helicopter pilot with 25 years and 3500 flying hours on the Super Puma, explains: “If you get caught in a valley during a sudden weather changed, you have a problem. In earlier times, when we flew the Alouette, which has only one engine, we had some flight limitations for flying over foggy valleys. You always had to be sure to have enough visibility below the fog with references to make an autorotation landing. Now we have two engines on all our helicopters, so something must be really bad if you need to make an autorotation landing.”

The year 2017 started extremely busy for the helicopter pilots. For two weeks from 28 December, up to seven Super Pumas equipped with bambi buckets were used against Switzerland’s biggest wildfire in 20 years. While much of Switzerland was covered in snow, fires had broken out on the south side of the Alps as it had not rained for over a month. The Super Puma’s bambi bucket drops 2500 liters of water every time, six times the amount of the EC635, so it is the preferred asset for fighting large fires. One Super Puma equipped with a FLIR pod was used to look out for smouldering fires. The helicopters logged 210 flying hours during the mission, comprising a total of 1200 rotations and dropping 2400 tons of water.

The firefighting was quickly followed by the annual World Economic Forum in Davos between 17 and 20 January, traditionally one of the busiest events of the year for the Air Transport Wings. Lieutenant colonel von Flüe describes the role of the helicopters during the event: “Most flights are VIP flights with heads of state. They are flown exclusively by the Swiss Air Force. Then we also have police flights, flights escorting convoys on the ground and, since two years, air policing. This means we have two special forces guys on board with machine guns, while we patrol the inner circle around Davos.” 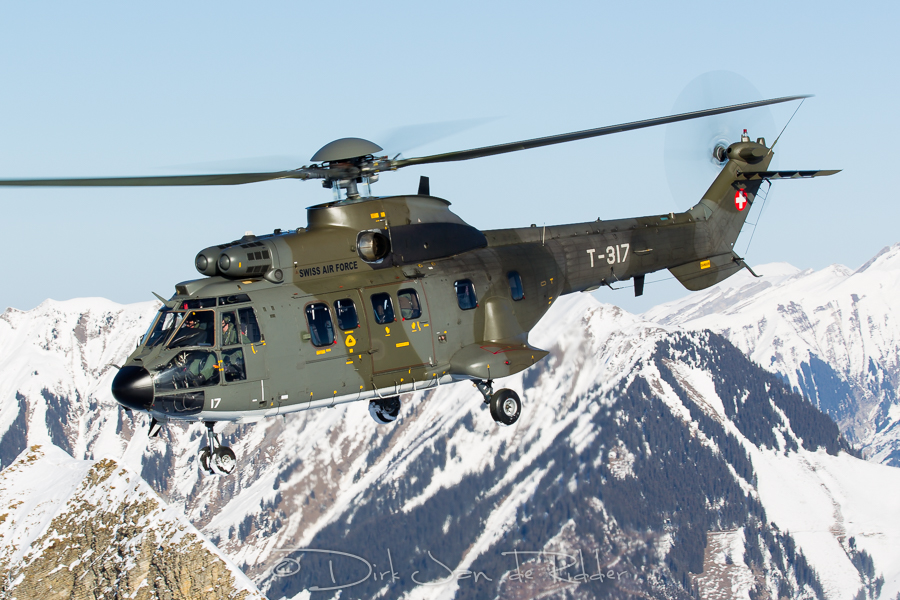 Due to Switzerland’s neutrality military deployments abroad are virtually impossible, but humanitarian support missions have increased over the last two decades. The helicopter community takes the largest responsibility for such deployments. In 1999, the first ever deployment abroad occurred when three Super Pumas deployed to Albania in support of the UNHCR for 4 months. Later, they also deployed to Kosovo (KFOR) and Bosnia (EUFOR). Three Super Pumas were even deployed to Sumatra, Indonesia for two months in 2005 in support of the UNHCR mission following the devastating tsunami. Super Pumas have also deployed to Greece and Israel for firefighting on a number of occasions.

As part of the Swiss Air Force’s drive towards commonality within its helicopter fleet, the Super Pumas were upgraded by 2014 with a glass cockpit for use with Elbit helmet-mounted displays. As many as 50 new systems were integrated creating a state-of-the-art Intelligence, Surveillance and Reconnaissance (ISR) platform. The Super Puma’s avionics are now much more modern than the Cougar’s. The Super Pumas have always lacked defensive systems though and there is no intention to change this. Cougars are equipped with the ISSYS self-protection system, comprising a radar warning system, missile approach warner and laser warner. In addition, equipped with door guns, it would make them the asset of choice in hostile areas with military activity. During 2017, it will be decided whether the Cougar will receive the same avionics upgrade as the Super Puma.

Flying psychologists – Pilot training in Sweden
Back to the Future? – F21’s Gripens