A couple of years into the 21st century, the Turkish Air Force faced a challenge. Its pilots were trained using aircraft over 30 years old with analogue instruments while converting to a modern fourth-generation platform like the F-16. Something had to change, especially with the intention to buy the F-35 Lighting II in the near future in mind. The solution, made in 2007, was to replace the T-37 Tweet with the KT-1T turboprop trainer and to modernize the T-38 Talon. Turkish Aerospace Industries was heavily involved in both projects.

Base commander major general Kubilay Selçuk, a pilot with a few thousand flight hours in the F-100 Super Sabre, F-104 Starfighter and F-16 Fighting Falcon sums up some of the changes: “Many things have changed in the past few years. We resurfaced the runways and taxiways, built new ramps with sun sheds and other facilities such as a simulator center. Our modernized T-38Ms, new KT-1Ts turboprop trainers and simulators enable us to train fighter pilots well into the future. Future fighter pilots will not be assets of a command center. They will be a vital part of that command center, collecting more and more information themselves and acting accordingly. We prepare them for that.”

Turkish Air Force pilots are trained at the 2nd Main Jet Base, just north of the country’s third biggest city Izmir along the west coast. The 2nd Main Jet Base actually comprises two airbases, each with a single runway only separated by the small village of Kakliç. To the west of Kakliç is Izmir-Kakliç airbase, which is home to an SF260 Marchetti squadron offering ab-initio training along with another squadron providing training to future helicopter and transport pilots. Izmir-Çiğli airbase, to the east of Kakliç, is a lot bigger operating the KT-1 and T-38 from a number of ramps and shelter camps, while also providing all the facilities needed by the students at both bases.

Currently 141 instructor pilots train around 300 students at the 2nd Main Jet Base, using 174 aircraft of five types. The log a combined total of up to 30.000 flying hours per year. A regular flying day at Çigli is divided into four 2-hour blocks, each normally containing up to 30 sorties, during which either the KT-1s or T-38s are flying. The only moment the two different aircraft types meet each other is when the first aircraft of the next block await clearance to taxi onto the runway as the final aircraft from the previous block are touching down. Aircraft continuously taxi out, take off, fly overhead and make touch and gos before landing. It is without doubt the Turkish Air Force’s busiest airbase.

Before starting their flying courses, future pilots complete four years of education at the Turkish Air Force Academy in Istanbul. Upon graduating, they are physically tested and psychologically trained. If they pass this phase, they will start pilot training. If they don’t, they will get another job position in the Turkish Air Force or any of the other armed services. Major Ali (fictitious name for security reasons), an experienced T-38M instructor, explained what students have to undergo during their time in Izmir: “Students spend a total of three months flying the SF260D, six months flying the KT-1T and six months flying the AS532, CN235 or T-38M. Apart from the flying training, we provide them a lot of other types of training, including academic, simulator and technical courses, water survival training as well as squadron and centrifuge training, for a total of 600 classroom hours. Students who drop out of pilot training, may still be selected to become a weapon systems operator on the F-4 Phantom. The students all have different types of intelligence, methods in which they best absorb information. This could be visual intelligence, listening intelligence or emotional intelligence, for example. We survey them before they start and link them to an instructor pilot that best matches their type of intelligence.”

A new simulator training center was opened in February 2014. It offers six KT-1T and four T-38M simulators. The KT-1T simulators comprise two Instrument Flight Trainers and four Full Mission Simulators, two each with a 210° x 60° and a 270° x 110° visibility. For the T-38M there are only four Full Mission Simulators in the same configuration as the ones for the KT-1T. Major Ali explains the difference between both types of simulators: “The simulators with the wider view are single seater simulators in which the pilot can look upwards, so it is ideal for aerobatic training. The other simulators are double seaters used for training emergencies and instrument flying. The simulators are a big improvement. The T-37 simulator did not even have a screen, just instruments. The simulator system can now even be used to train formation flying with pilots flying in two different simulators.” The new teaching methods and the commissioning of the simulator center has led the students to acquire more information in a shorter time frame. For example, T-38 students now fly 69 real sorties instead of the 81 sorties their predecessors used to fly, while their skills are better than ever before.

While Turkish Navy and Coast Guard pilots are already trained by the Turkish Air Force, Çigli opened up as an international military flight school in 2015 under the name of Multinational Military Aircrew Training. English is already the language spoken by all students in-cockpit. On the ground the main language is Turkish, but every once in a while briefings and debriefings are done in English. Quality of pilot training is on a very similar level to that provided by the United States Air Force. Students and instructors are occasionally trained in the United States. The main difference with training in the United States is the fact that students in Turkey stay for a shorter period and they need fewer flying hours to become proficient, thus making it a cheaper alternative to training at Sheppard AFB. Albania, Czech Republic, Pakistan and Saudi Arabia were mentioned as some of the countries showing serious interest in the project. In principal, elementary flight training on the SF260 will not be available to foreign students, but exceptions may be made for smaller countries. All other training aircraft, including the AS532 Cougar and the CN235 will be available for foreigners. Foreign instructor pilots are also more than welcome. A Pakistani exchange pilot at 121 Filo is currently already training some of the students on the T-38. Should any country come up with a need to base their training aircraft abroad, this will even be considered.

Students fly 22 sorties on the SF260 during Phase I of their pilot training, one of which is a solo flight, before they start flying the KT-1T. The KT-1T was selected by the Turkish Air Force in 2007 as the new basic training aircraft and a $350 million contract was signed for 40 aircraft with an option on another 15. It is jointly manufactured by Korea Aerospace Industries and Turkish Aerospace Industries (TAI). During AFM’s visit, Korean personnel were still supporting operations, but their contract would expire in 2015. The KT-1T was designed to have a jet-like feeling and the squadron flying it, 122 ‘Akrepler’ (Scorpions) Filo, is therefore still designated as a Basic Jet Squadron.

The squadron consists of two flights, both of which offer exactly the same kind of training, both Phase IIA for all students and Phase IIB for future fighter pilots. All students first fly 37 sorties in the KT-1T (Phase IIA), two of which solo, before it is decided whether they will become a fighter, helicopter or transport pilot. Helicopter and transport pilots then go back to Kakliç to log between 50 to 60 hours on the AS532 (Phase IIIR) or CN-235 (Phase IIIT). Most students will become a fighter pilot and they continue to fly 32 sorties in the KT-1T, mostly consisting of low level navigation and formation flights with up to 4 aircraft, during Phase IIB. 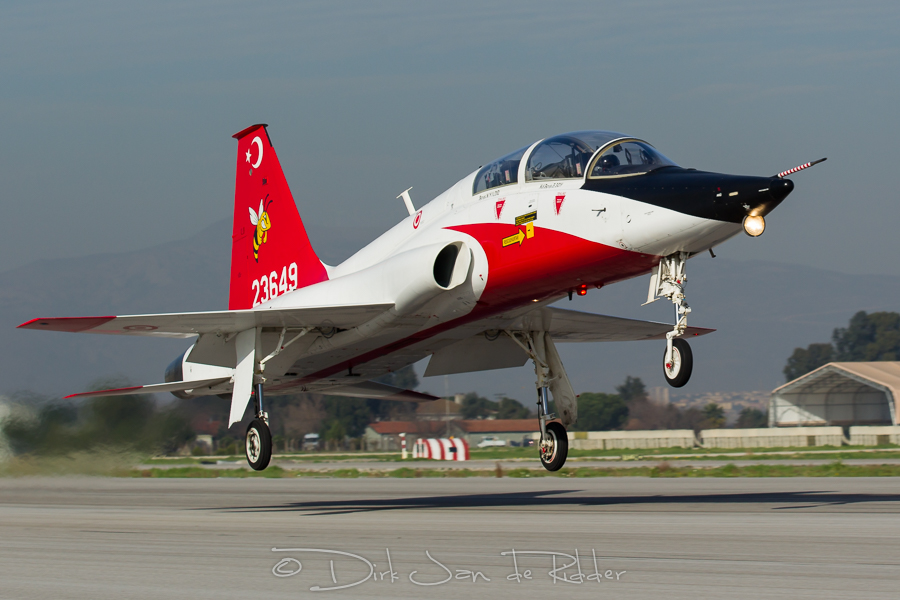 Originally donated by the United States Air Force in the 1970s, a total of 68 T-38 Talon supersonic jet trainers remain in service today. TAI delivered the first modernized T-38M to the Turkish Air Force in June 2012. This project was initiated in 2007 with a contract for the upgrade of 55 aircraft. An option on a further 13 aircraft was later taken. Apart from an overhaul, extending the aircraft’s service life to beyond 2020, TAI included a new control computer, multi-function cockpit displays, a head-up display in the front and hands on throttle and stick controls. The first five aircraft, including two prototypes and three production examples, were delivered by TAI while the Turkish Air Force maintenance center at Eskisehir continued work on the remaining airframes.

Advanced jet training consists of 57 dual and twelve solo flights, including instrument flying, formations up to four aircraft, low level navigation and night flying. On their thirteenth sortie students go solo. Unlike their American counterparts flying the T-38C, Turkish students don’t fly supersonic in the Talon. This is reserved for experienced instructors performing check rides. In terms of organization, 121 Filo is divided into two flights carrying out advanced jet training and a third flight for Introduction to Fighter Fundamentals (IFF). IFF is a new role to the 2nd Air Base and to the T-38. It was taken over from 133 Filo flying the F-5 at Konya, when the type was withdrawn from active service in 2013. The change was a very small one since both types are virtually identical. The main difference is the fact that the T-38 cannot carry any armament or drop tanks, nor does it have wingtip tanks, so all weapon deliveries are therefore simulated. The IFF phase consists of a single air intercept sortie, six basic fighter manoeuvre sorties and eight air-to-ground sorties, none of which are flown solo, along with 10 simulator rides. 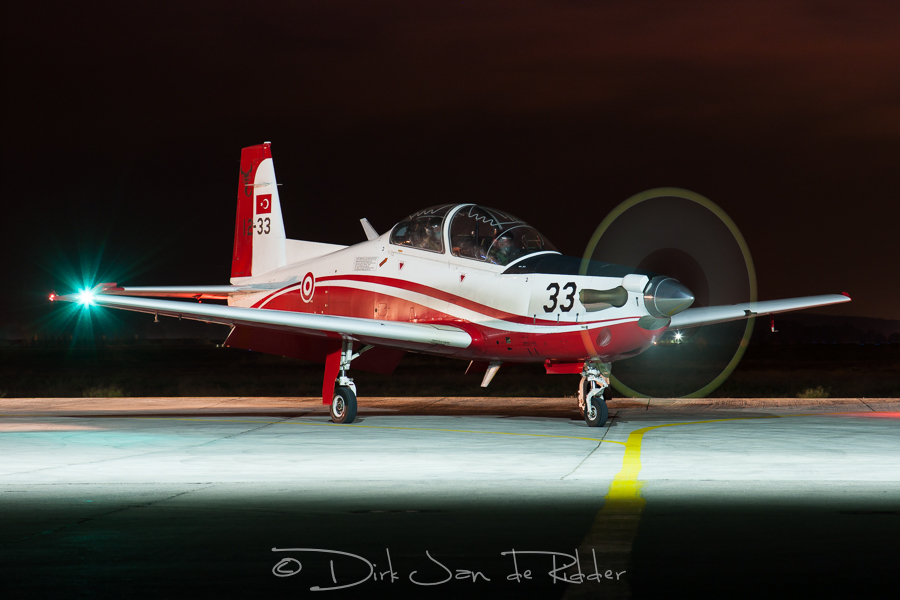 Only one squadron at Çigli is not directly involved in training. Pilots from 124 Filo perform check flights, provide instructor pilot training and carry out research and develop, using T-38 Talons on loan from 121 Filo. Following their overhaul and upgrade, the T-38s still have many years of service left. The squadron expects to continue flying it until around two years after the US Air Force stops operating the type, meaning the aircraft could stay in service until around 2030. Preparations for the selection of a new training aircraft that must replace the T-38 are ongoing. It should probably enter service in the second part of the next decade.

The Turkish Air Force has strong ties within NATO, the Middle East and Asia due to the country’s geostrategic location and foreign policy. In short time they have managed to turn their own version of Red Flag, Anatolian Eagle, into an exercise providing the highest level of training value possible. It is frequently attended by air forces from Pakistan to the United States and from Saudi Arabia to the United Kingdom. It leaves no doubt that the Turks know what they are doing when it comes to air warfare and providing the right amount of training value. Those air forces attending Anatolian Eagle will know their future fighter jocks will be in great hands as a student pilot in Turkey and it will take short time before the rest of the world knows it as well.