The Swedish Air Force’s way of training new pilots is unique in many ways. Pilots are selected for a specific track (fighter jets, helicopters or transport aircraft) from day one and the success rate is nearly 100%. Students destined for fixed-wing aircraft will log their very first flying hour in the Sk60 training jet, better known as Saab 105. Moreover, it is just as much the instructors’ responsibility for a student to graduate as it is a student’s.

During my visit to the Swedish Air Force’s Flying Training School I was able to speak with major Marcus Jedby. He is the commander of the Education Unit, responsible for a variety of flight training courses. Below, he speaks about his role and what makes pilot training in Sweden so special.

“My biggest responsibility here is to train the qualified flying instructors (QFIs). The QFI course differs from other countries in a few ways. The most special part about it is that we have a lot of theoretical training about psychology and pedagogy for five weeks followed by three weeks of live practice, where we put theory into practice.”

“We turn instructors into a coach rather than a judge. We also make them aware that they don’t judge a student for having a different personality. That helps them to become as objective as they possibly can be.” 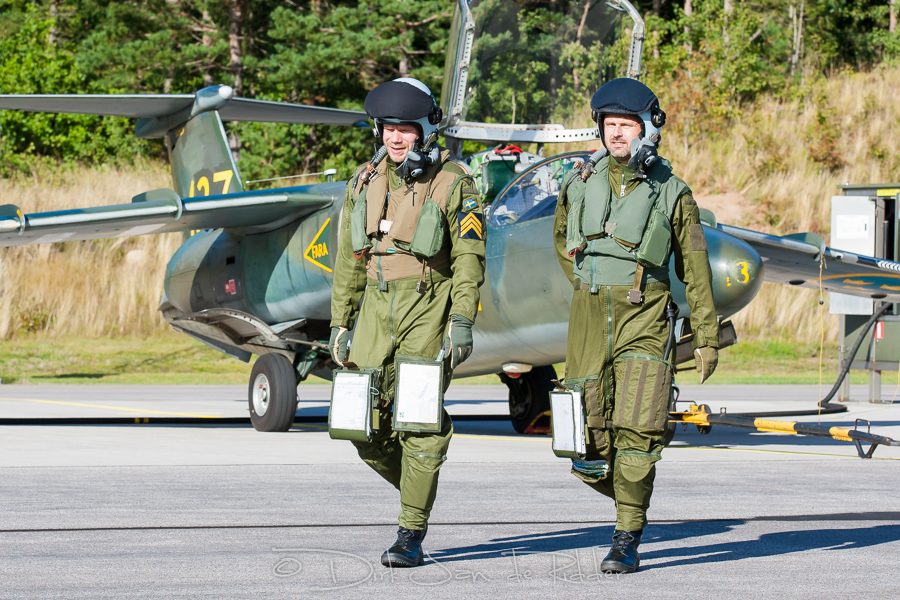 “If we have a ‘failed’ sortie, it is as much a failure for the student as for the instructor. In most other countries instructors just control [check] things. I don’t think you overcome problems that way, you just confirm them. Instead we focus on the learning process and we try to create an environment that is optimal for learning. As we see it, the student and the instructor are in it together and the goal is to get through it together.”

“Our method has three pillars: the relationship between student and instructor, communication and self-confidence. The relationship between the student and the instructor has to be very open: no classical [situation with a] higher officer and cadet. Students and teachers can say everything. Every wrong thing they do, every thought they have, everything. We try to build the students’ self confidence as much as we can. It is scientifically proven that confidence makes better learning possible and that if you learn during stress you don’t get the deep learning process.”

“You always need some amount of pressure, but we check that they can manage under stress during their first five days, during the selection process, so we don’t have to check those things anymore. We just have to teach them as much as possible. Then later on when they come under stress in a live war situation, they actually have more knowledge to bring up.”

“During the last part of the QFI course we take volunteers ‘from the street’, generally with a connection to the Swedish Armed Forces, and the instructors are supposed to teach them how to fly in three weeks. They will fly once every day from day two. QFIs have to put theory into practice and really adapt. We schedule some special sorties that we know can be confusing in terms of communication between the instructor and the student.”

“I would say that part of the education represents almost a whole year of experience [for the QFIs], because you very intensely make mistakes and learn for three weeks. Compared to just talking about it and then getting a real student this is an effective way of training QFIs if you can get it through the rules and regulations, but we have made it possible in Sweden. I am pretty convinced that’s not done anywhere else in the world.”

“We depend on having almost the same amount of instructors as students, maybe one on every two, because the relationship is so important. When you know each other well, you don’t have to grade and judge each sortie. It is impossible to use our system in a large air force such as the United States Air Force. If you have 2000 students and maybe 200 instructors you can’t work like this.”

“We have washouts, but very few. It is almost never the actual skill of flying that’s the problem. We have a flexible syllabus. If we take touch and go landings as an example, it is seven or eight sorties just touch and go’s. If we don’t feel like one student has gone all the way he can get two or three more. That is no problem. Of course you have to draw a line somewhere as we don’t have unlimited resources, but we don’t have a fixed line. It has never come to that point.”