While thousands of British, Dutch and German tourists celebrated their holiday on the beaches of Lanzarote, they saw formations of five Spanish Army helicopters fly over the island’s beaches, mountains and volcanic landscapes multiple times a day. For pilots and maintenance crew of BHELMA VI their week at Lanzarote was far from a holiday. It was their busiest week of the year.

BHELMA VI (Batallón de Helicopters de Maniobra VI – Tactical Helicopter Battalion VI) sent two AS332 Super Pumas and three AB212s to participate in exercise Famara 2016 between 5 and 10 June. Nearly all of its pilots as well as many technicians and other personnel attended the battalion’s annual exercise. Every day three five-ship sorties were flown, comprising a morning, afternoon and night sortie. The main objective of exercise Famara 2016 was to train the planning, management and execution of tactical missions while operating out of a deployed base on a fictional island infiltrated by insurgents. Every sortie was lead by another pilot and critically evaluated by battalion commander lieutenant colonel Alberto Quero Tomás Fernández de Tejada. He explains: “What I try to do in this exercise is to train my officers to follow standard procedures so that all the preparations and all the procedures can be performed easier. For the next six months we have a reduced company of helicopters available for national requirements. This week is an evaluation to certify them for that mission. I am mainly evaluating the preparation and the briefing of the missions. My major, the chief of operations, evaluates the flying part of the exercise.”

Although a pilot himself, the battalion commander did not fly any of the sorties during the exercise. That would only distract the pilots from their mission, he says. Every single time the helicopters take off he joins all other personnel outside to watch them depart, but he assures that is ’purely out of interest’. Even without being there himself he is able to watch each helicopter’s every movement with a live GPS tracking device. There is no escaping, every delay or deviation from the briefed flight plan will be part of the debriefing. And as the formation returns he is again standing outside to watch them come in and to hear about their experiences.

The exercise divided the pilots into two groups, each flying the same missions on different days or times of day. The first sortie comprised a helicopter patrol looking for a jihadi insurgent driving around the northern part of the island by car. After he was located, his coordinates were passed on to [simulated] attack helicopters who took care of the rest. This sortie also served to locate landing spots, power lines and other obstructions for their upcoming night sortie, since night-time training flights are not permitted without the pilots familiarising themselves with the situation. For the second sortie, information was received that a high-value target would meet with other insurgents. After approaching the target location at low level, hiding between mountains wherever possible, special forces were dropped by three helicopters. Two Bell 212s circled nearby, ready to jump into action on a medevac call. The objective on the third mission was very similar. Special forces again infiltrated a meeting of high value targets, but this time at night!

The biggest sortie of the whole exercise comprised an air assault mission that lasted from sunrise until after sunset on Wednesday. Airmobile forces and their equipment were transported from the island of Fuerteventura to Lanzarote, both on board the helicopters and using external sling loads. By mid-day everything had been transferred and the first group of pilots returned to base. Late afternoon the second group took over, bringing all personnel and material back to Fuerteventura. Their final hop was during sunset and they returned to base switching to night vision goggles during the flight. 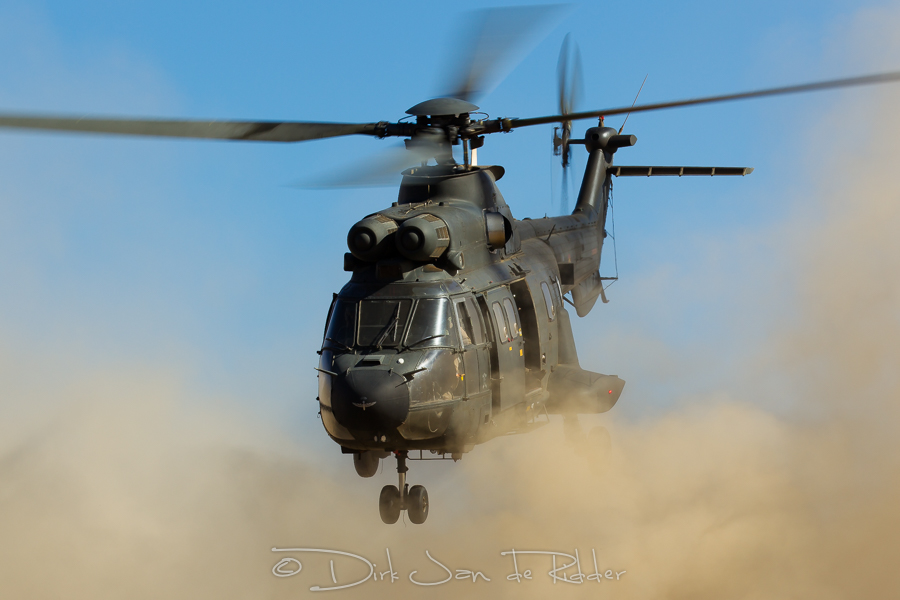 BHELMA VI, the Spanish Army’s smallest helicopter battalion, is equipped with three AS332 Super Puma and five AB212 Twin Hueys and based at the island of Tenerife. Until the beginning of this year it was also the last main operator of the UH-1H in the Spanish Army, but the type was withdrawn from use after over 30 years and 20.000 flying hours with the unit. Operating multiple helicopter types creates many challenges, as lieutenant colonel Quero explains: “Having two helicopter types is really a problem. The UH-1 has a single engine and in Spain it wasn’t certified to fly over the sea with passengers. Here in the Canary Islands most flights include some part of the flight over the water, so it was not really useful, but we loved that helicopter because many of us learned to fly with it. We are now in a slow but determined transformation process towards the Super Puma, which in the end will enable us to count on just one helicopter model, similar to other helicopter units in the Spanish Army. This transformation depends on the arrival of the NH90 which is going slowly, so I am afraid we will have both helicopter models for some more years. The AB212s can fly for at least five more years.”

“I am trying to qualify pilots on just one helicopter, but that is not entirely possible. I don’t have enough pilots to separate them perfectly between the AB212 and the Super Puma. It happens, but it is not common for pilots to fly both helicopters during the same period. They fly the Super Puma and if I need them to fly the AB212 they will fly that helicopter for a while. For pilots with a lower amount of flying hours it is quite dangerous to change between the two helicopters. They will fly just one helicopter, even though some of them may be qualified in both. I have flown some hours in both and [even] for me it is difficult to switch.” 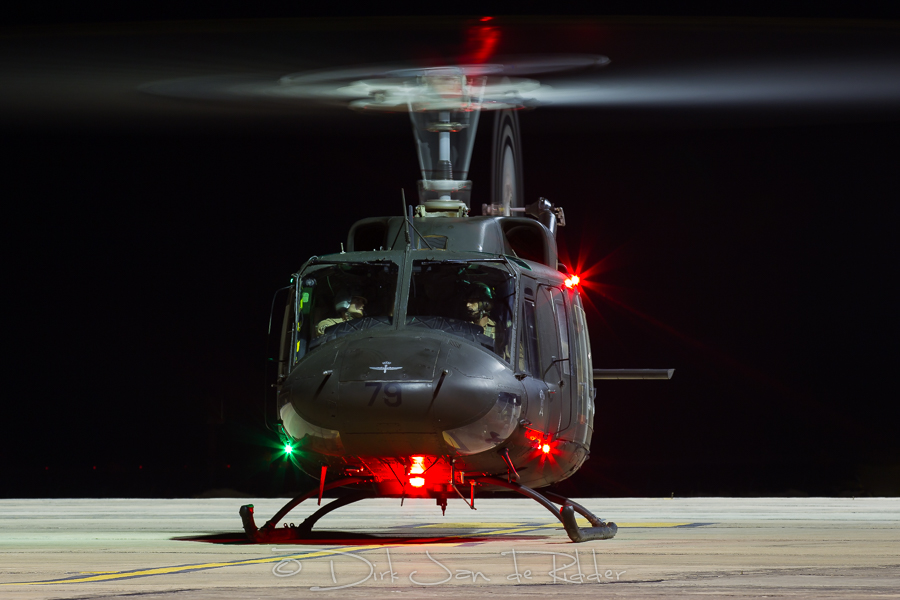 BHELMA VI is the only Spanish Army helicopter battalion that does not form part anymore of Fuerzas Aeromóviles del Ejército de Tierra (FAMET, Spanish Army Aviation). Operating under direct command of Mando de Canarias (Canary Islands command) since 2010, BHELMA VI’s main mission is to support the military command of the Canary Islands, be ready to deploy abroad on peace keeping missions, integrate in large force operations and help the civilian population in case of emergencies. Lieutenant colonel Quero: “The command structure makes us different, but we work a lot with other FAMET units. Not as much as other FAMET units, but that is not because of the organisation. It is because of the distance. It is not easy to send our helicopters to the peninsula to cooperate in big exercises, but our pilots cooperate in every big FAMET exercise. Next month we will have some Chinooks from Madrid participating in an exercise here with us. I am also planning to have a seminar of attack helicopter operations. Preparing to work together is challenging. In our current exercise we simulate a patrol of attack and [heavy] transport helicopters. My officers must be conscious that we will never operate abroad without attack helicopters and normally not without transport helicopters either. We have to be ready to plan and execute operations all together.”

The Spanish Army has three tactical helicopter battalions, two of which are based in mainland Spain. BHELMA III in Logroño (northern Spain) used to operate the Cougar and is starting to convert to the NH90. BHELMA IV in Seville still operates both Cougars and Super Pumas. BHELMA VI has always been the ‘lesser-equipped’ battalion operating older and lighter helicopter types. In 2010 a pair of Super Pumas arrived, significantly improving the unit’s capability of airlifting personnel and cargo between the islands. The original plan was for all three tactical transport battalions to be equipped with the NH90. Due to budget cuts and cost overruns, the NH90 order was cut in half and only BHELMA III will operate the helicopter. BHELMA IV will become a Cougar battalion with its Super Pumas to be transferred to BHELMA VI at Tenerife. 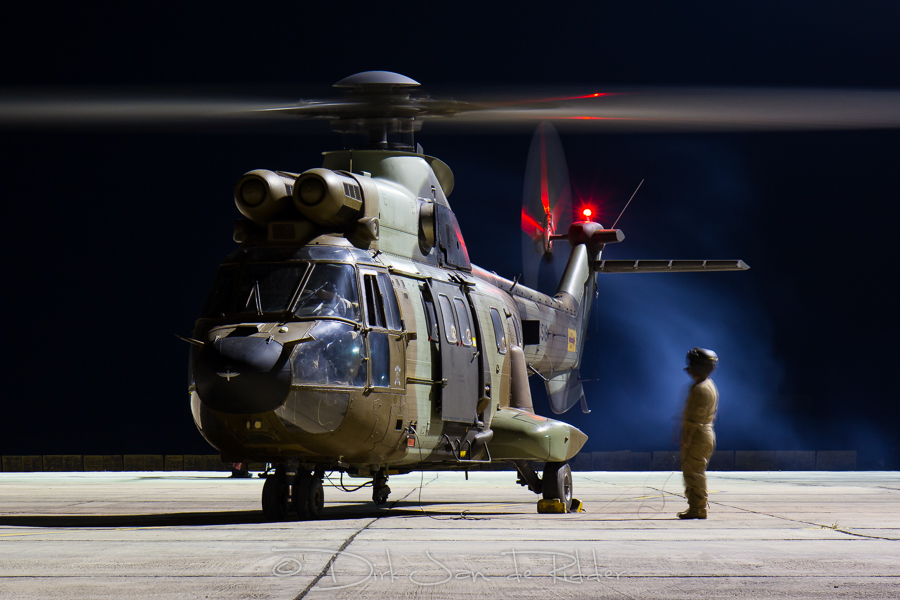 The arrival of more Super Pumas and the eventual retirement of the AB212 will enable the battalion to prepare for operations abroad like the other two tactical helicopter battalions. Until now BHELMA VI has only carried out peacekeeping missions in Bosnia and Herzegovina (in 2004 and 2005) and Lebanon (from 2008 to 2009). Its pilots, board operators and maintenance personnel have also deployed to other locations as part of other battalions. The final FAMET deployment to Afghanistan in 2013 was largely composed of BHELMA VI personnel.

Lieutenant colonel Quero concludes: “BHELMA VI is not a very popular unit. We have a system asking personnel where they want to go. If there is a post where the army needs someone and if no-one wants to go, someone has to go. This is a very nice place and a very nice unit. For people with families and children on the peninsula it is not an easy decision to move the whole family, but when they come, they don’t normally want to go back to the peninsula anymore.”