Helicopter pilots flying in mountainous terrain face many more challenges then their fixed-wing colleagues. I flew with the Spanish Army’s mountain flying experts to learn about those difficulties, the unit’s current operations and its future with the NH90.

When arriving in Logroño, in northern Spain’s Rioja province, one does not immediately get the impression this is the country’s primary location for mountain flying. In the distance, some hills can be seen but apart from that the terrain is almost flat. Nothing is further from the truth. Being located just east of Logroño in the middle between two of Spain’s primary mountain ranges, the Iberian System and the Pyrenees, the Spanish Army’s BHELMA III (Batallón de Helicópteros de Maniobra III – Manoeuvre Helicopter Battalion III) has grown out to become the Spanish armed forces’ most experienced helicopter unit when it comes to mountain flying.

The unit operates around twenty helicopters, comprising the AS532UL Cougar (designated HT.27 in Spain) and the UH-1H Iroquois (HU.10). BHELMA III has operated the UH-1H for as long as the battalion exists, so both celebrated their 40th anniversary in 2014. The helicopter will soon be withdrawn from use, but 3 Spanish Army units still fly the good old Huey.

The Huey performs the same missions as the Cougar, but of course it is less capable. It is considerably smaller, slower and it only takes about a third of the cargo or half the amount of troops compared to a Cougar. Until recently both types flew missions together, complementing each others strengths and weaknesses, but the focus is now fully on the Cougar and the future NH90. Hueys are flown only by pilots who used to fly them before the battalion received the Cougar. They consider it an aircraft that doesn’t allow for mistakes.

In mountain operations the Huey is much more effected by wind than the heavier Cougar and there is hardly any technological aid. The helicopter is cheap to fly and despite its age it is still an aircraft that doesn’t need a lot of maintenance. It is still available for missions abroad (the last one being Lebanon in 2008), but as years progress deployments become less and less likely. An official date for the helicopter’s retirement has not been set, but this will take place over the next few years.

A considerable part of training at BHELMA III is dedicated to mountain flying. Each summer and every winter a two-week mountain flying course takes place in the Pyrenees which are open to pilots from other units within the Spanish armed forces and even from abroad. Other regular training activities include alfa (company-level) and beta (battalion-level) exercises and two or three months of daytime flying alternated with a month of night flying.

Mountain flying is far different from simply navigating between the mountains and gaining altitude to avoid any peaks. Unpredictable wind and air turbulence can make flying very challenging. Even the most experienced pilots still encounter new situations and challenges when flying between the mountains. It is not always straightforward to perceive the helicopters attitude. Inexperienced pilots tend to pull the cyclics back when approaching a slope, dangerously reducing air speed, and push it forward to enter a valley, thus increasing the airspeed to such an extent that it exceeds the VNE (Velocity to Never Exceed) causing damage to the airframe.

These issues cannot be solved by simply flying higher. As the altitude increases, helicopters face performance reductions and crews may experience physiological difficulties to judge situations and take decisions due to decreased oxygen levels available to their brains and eyes. An experienced instructor and test pilot with well over 3000 flying hours divided between the AS532 and UH-1, who preferred to remain anonymous, explains the difficulties of mountain flying: “a mountain flight can be compromised even on a day when the weather seems perfect. On the one hand the difficulties comprise the material, especially loss of engine performance and ability to lift cargo as the altitude increases.”

“The human factor on the other hand is more important. At high altitude the crew’s ability to take decisions may be compromised due to physical or psychological issues. Generally, the HT.27 performs well for our missions both in Spain and other areas of operations. The helicopter’s maximum altitude has never been a problem, since we don’t fly at extreme altitudes. The maximum altitude we reached in Afghanistan was 11,400 feet during 25 minutes in order to cross a mountain range.”

”When it comes to flight procedures, flying in Afghanistan is not much different to flying in the Pyrenees. The differences lie in the tactical environment, which requires a variation of flight profiles between low and high altitude, as well as in orography [the position and shape of mountains] and meteorology with contrasts in altitude and temperature encountered in much shorter intervals than in Spain.”

The battalion returned from their last Afghanistan deployment in May 2013. Pilots couldn’t specify their operations into too much detail, but in general they comprised regular transport of personnel, material, food, armament and other resources. 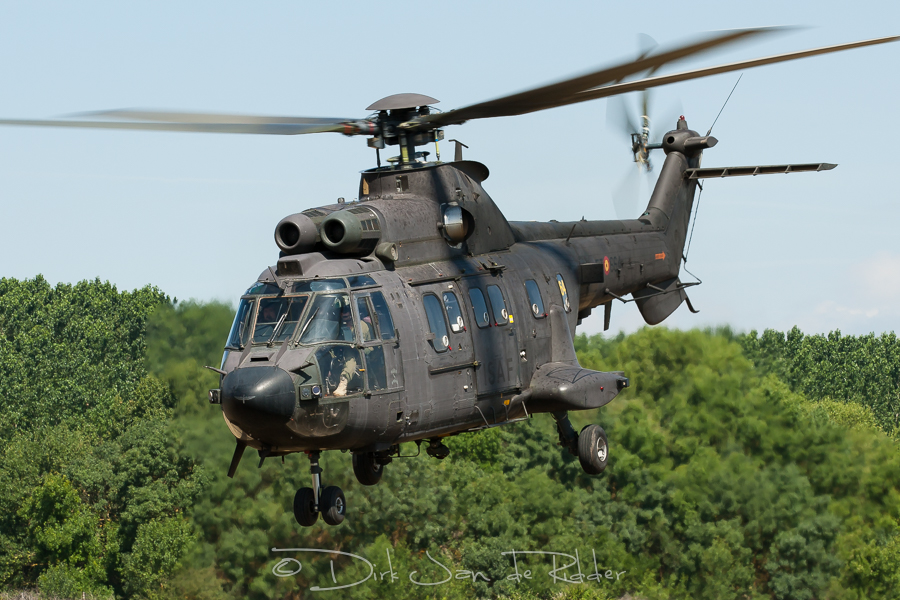 Out of 28 NH90 helicopters originally planned for the Spanish Army, only 14 will be ordered after the Spanish armed forces cut their order in half from 45 to 22. All of them will be delivered to Logroño because BHELMA III has been selected as the sole future operater of the NH90. After a number of delays, the first NH90 is now due to arrive at Logroño in spring of 2015, by which time the unit plans to have instructor pilots ready to train the other pilots. Technicians are currently being trained by Airbus Helicopters in France. It will take around four years for all NH90s to be delivered.

In the mean time, their homebase will be extensively modernised with a new maintenance hangar capable of housing 8 NH90s, a new platform, a simulator featuring a network connection with helicopter simulators elsewhere in Spain and even a short runway. Lieutenant colonel Alfonso Castilla Barea, the commanding officer of BHELMA III, elaborates about ongoing preparations: “Two of our technicians are currently following courses with the contractor, Airbus Helicopters, and they are going to support the ministry of defence in the procurement process. We have also initiated contacts with other NH90 customers in Europe to keep an eye on the developments. We have been to Le Luc, where NH90 pilots of the French armed Forces are trained, and they told us the bulk of pilot training involves knowing the cockpit inside out and understanding the helicopter’s new features. The helicopter itself seems to be quite easy to take anywhere.”

He expects the NH90’s capacity and performance to be a little better than the Cougar’s, most likely meaning no change in mission: “The tactical capabilities will be more or less the same, so I guess we are going to keep the same tasks. From a tactical point of view there is not going to be a revolution, from an aeronautical point of view it is quite a different machine. It provides you with more capabilities for IFR flight and some of our missions are going to be much easier since all the aids the helicopter has are wonderful.”

“All helicopter battalions will specialize in one helicopter type to simplify logistics, maintenance and training. My assessment is that we are going to get rid of the Hueys at the very beginning of the implementation of the NH90, because I don’t see the battalion running three different models. Having two different models is quite messy for us and having three would be impossible. They will be relocated.”

Fighting piracy
Elephants to the rescue