“We just started to run the marathon. We have only run around 10 to 12 kilometers, so we still have another 30 kilometers ahead of us. Sometimes you want to finish the marathon and you look ahead and you must be patient, because if you run too fast you will not get to the end. That’s the idea that I tell my personnel every day. Let’s take it step-by-step. We must keep in mind that the marathon is 42 kilometers. Every step that we take is important, because we are setting the basis for the future.” Lieutenant colonel Magín Álvarez Arribas, commanding officer of BHELMA III (Batallón de Helicópteros de Maniobra III, or tactical helicopter battalion III) of the Spanish Army describes they are well on track with their new NH90 helicopter, but converting to a completely new aircraft type requires a careful approach.

After years of negative publicity for the helicopter program in general, things are running smoothly now. “We are pretty much already doing everything, except operating from ships. We do shooting, we do mountain flying, all tactical transportation that you can imagine. We are close to being able to do special operations. Once the program started and we received the first two helicopters, the deliveries were perfectly on time and there were no problems.” 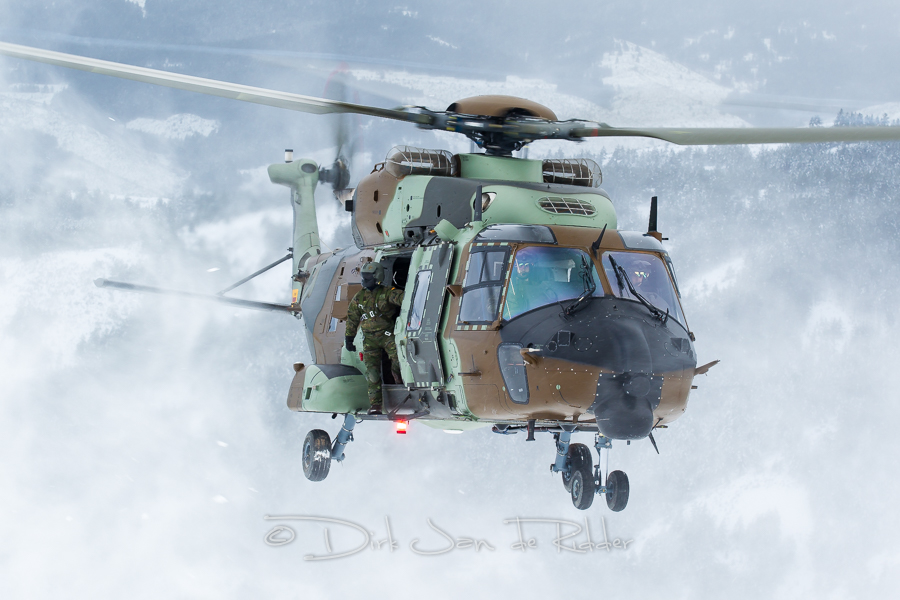 By the time of the author’s visit, the battalion’s NH90s had reached nearly 2,000 flying hours and their predecessors, AS532 Cougars, had been transferred to other battalions. The Huey, which was still flown by some BHELMA III pilots alongside the Cougar, had been withdrawn from use by the Spanish Army shortly before. “For one year and four months we were fully operational on the Cougar and Huey. We kept two worlds on parallel. We couldn’t make all the effort to complete the transformation of the whole battalion at the same time, so we split the battalion in two halves. We maintained capabilities with some pilots flying on the Cougar and the others on the NH90. In October or November of last year we decided that we had enough aircraft, enough mechanics and flying personnel to change to one model.”

Lieutenant colonel Álvarez Arribas flew tactical transport helicopters with BHELMA VI at the Canary Islands and attack helicopters with BHELA I at Almagro before converting to the NH90. Pointing at some old UH-1H Huey helicopters and a Bo-105 tucked away at the flight line, he jokingly calls the helicopters he flew before ‘junk’. He describes the NH90 as a Huey -a helicopter loved by its pilots- with two engines. “The most powerful thing that you feel when you are flying the helicopter is that it is very easy flying. Definitely much easier than the Cougar. The way of interacting with the helicopter is also very different. You have to change your mindset. Most of the time you should let the helicopter fly by itself. It knows a lot of things that you don’t know. It is quite simple, or it sounds quite simple, but for a pilot like me coming from older helicopters it is a big change.” 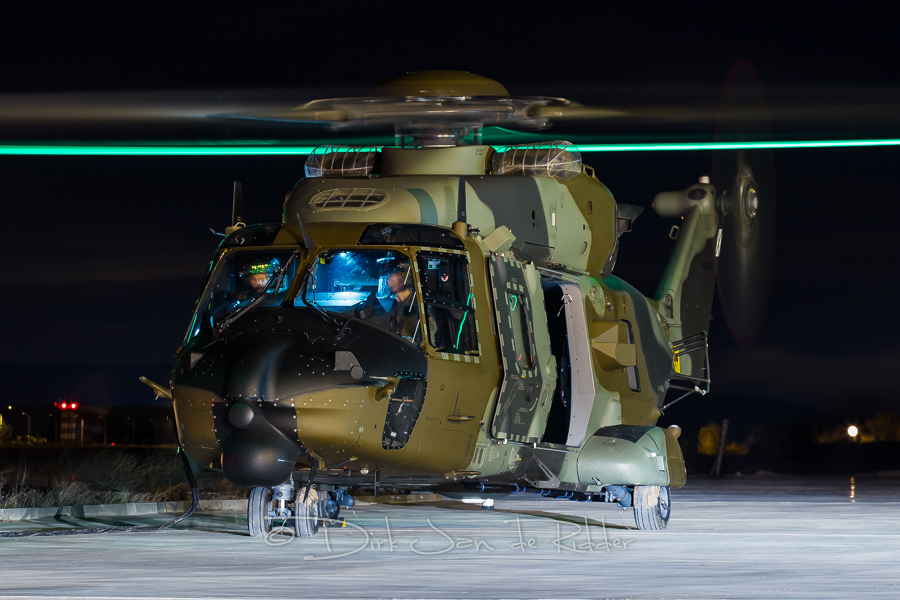 Converting to a new helicopter type comprises much more than just pilot training. “We came from having two models of helicopters, the Cougar and Huey, and now we are changing our battalion, infrastructure and mentality to the NH90. This includes not only the helicopter, but also the maintenance, how we are able to work for the sustainment of the helicopter. The first step was receiving the helicopters and having initial instructions for mechanics and pilots. Right now we are in the second phase that is getting the whole unit together and achieving a good level of piloting and maintenance. We will finish this build-up around the first quarter of next year. The next phase will be developing all those capabilities, so that we are able to deploy abroad as soon as possible.”

BHELMA III’s homebase Logroño, in northern Spain’s Rioja province, is the country’s primary location for mountain flying. Being located in the middle between two of Spain’s largest mountain ranges, the Iberian System and the Pyrenees, BHELMA III has grown out to become the Spanish armed forces’ most experienced helicopter unit when it comes to mountain flying. Lieutenant colonel Álvarez Arribas thinks that on its own was one of the reasons to base the NH90 at Logroño: “This battalion has been involved with all of FAMET’s past international missions and at the same time it is set in a place where we don’t have many restrictions for flights around the base. As a reference unit on mountain flying, I think it is quite a good decision that the helicopter came here. The NH90 is more powerful than the Cougar and due to the restricted weather conditions that we have every now and then, it is a much more secure helicopter to fly than the Cougar.” 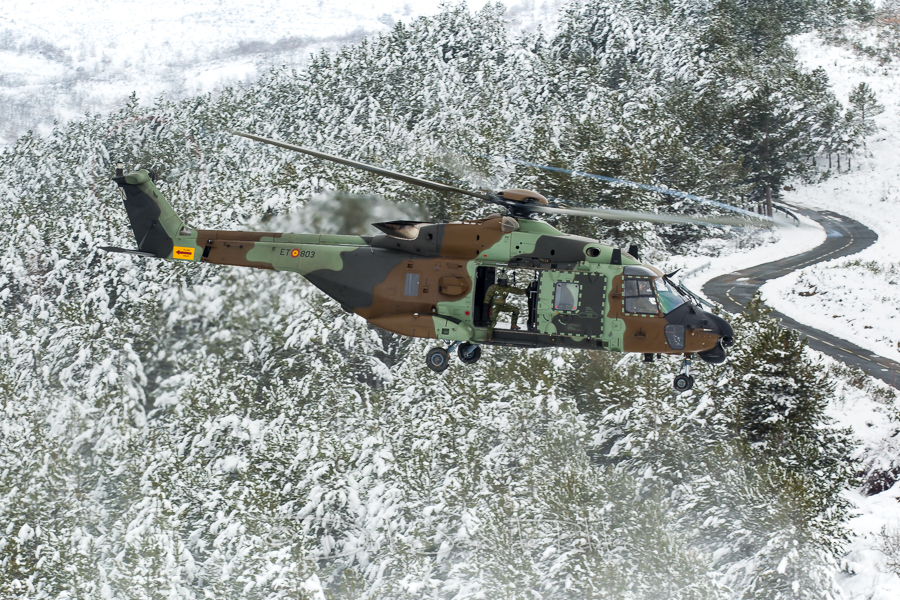 The advantages that the NH90 has over the AS532 are evident. While the Cougar was developed in the late 1970s as an upgrade from the SA330 Puma, the NH90 is a brand new airframe purely designed for military service. FAMET’s Cougars are equipped with 2 Turbomeca Makila turboshaft engines delivering 1185 kW of power. In comparison, the NH90’s two Rolls-Rolls Turbomeca engine each deliver 1662 kW. Although both helicopters are able to transport around 20 fully equipped troops, the Cougar can only transport 6 injured passengers on stretchers (plus 10 seated passengers) as compared to the NH90’s twelve, according to manufacturer specifications. A pilot clarified FAMET would normally operate the NH90 with around six stretchers though, to leave some room for treating the injured. With its maximum speed of 162 knots (versus 134 knots for the Cougar), the wounded will be transported to hospital considerably faster.

Other characteristics in which the NH90 performs much better than the AS532 include range (800km vs nearly 600km) and service ceiling (20000 feet vs 11000 feet), but lieutenant colonel Álvarez Arribas explained the latter is not currently much of a difference for Spanish pilots: “We do not train that. We do training under low pressure conditions at a hospital in Madrid, but we do not train these conditions in reality. The maximum that we can fly without oxygen is 13,000 feet for a short period of time. In Afghanistan we sometimes flew very close to that altitude.” 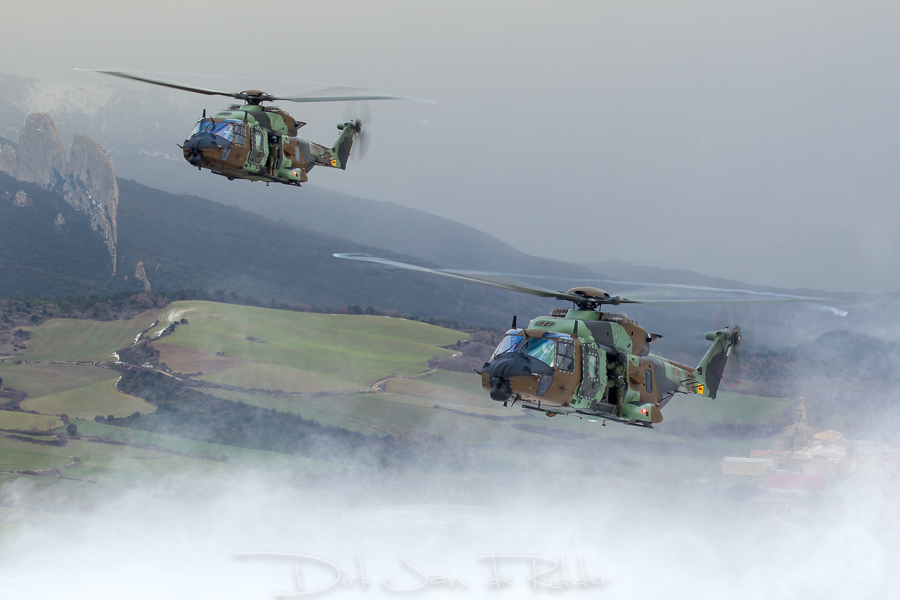 The final few of 16 NH90s are expected to enter service with the battalion by around 2021 or 2022. Equipping BHELMA III with the NH90 signifies the start of a long-term modernisation project for FAMET’s helicopter units. To simplify logistics, maintenance and training all battalions will ultimately specialise in one helicopter type. On the long run, the Spanish Army even plans to reduce their helicopter fleet back to four types. The whole armed forces may even end up following the plan. The EC135 (now H135) will then remain as the only training and utility helicopter. The Tigre has already become the attack helicopter of choice. The NH90 will take on the tactical transport role, with new CH-47Fs due to replace the CH-47D in the heavy-lift role. It will take some 20 years to complete the transition and it seems reasonable that the Spanish Army will eventually get more NH90s, or else it may have to reduce its tactical transport helicopter battalions from three back to one.