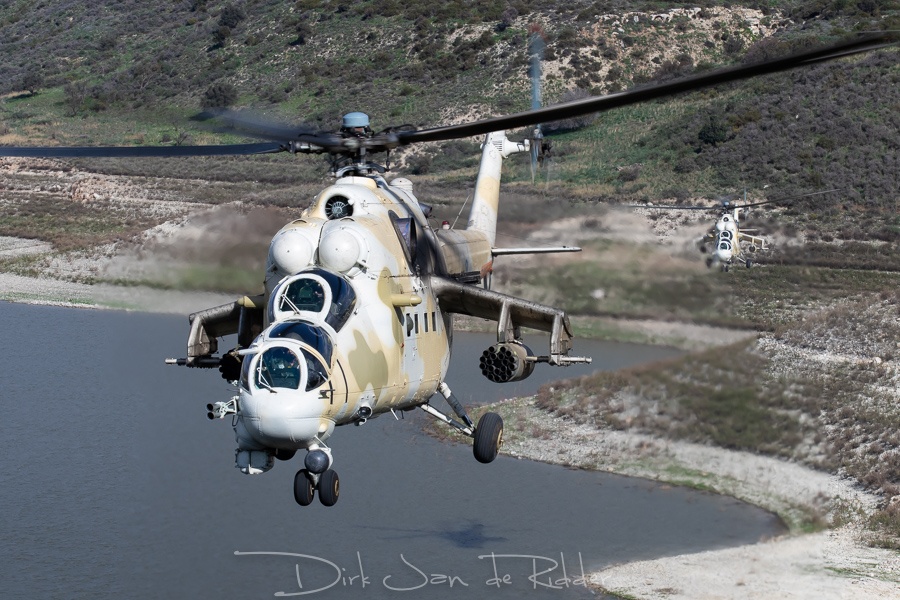 By legend the birthplace of the ancient Greek goddess of love, Cyprus has been divided since 1974 when Turkey invaded the north in response to a military coup backed by the Greek government. Northern Cyprus is run by Turkish Cypriots and is internationally only recognised as a separate entity by Turkey. Divided by a ‘Green Line’ patrolled by United Nations troops, the internationally recognised Republic of Cyprus covers the southern two-thirds of the island. Reunification talks continue to take place, but they have made little progress.

As early as 1999 rumours started to emerge about a possible purchase of South African Rooivalk attack helicopters. A year later the ministry of defence turned its mind to the Russian market, after having issues to close the deal with South Africa. The National Guard was then initially interested in the Kamov Ka-50 (NATO codename ‘Hokum’), but a study concluded that the Mi-24 ‘Hind’ or Mi-28 ‘Havoc’ would better suit its needs.

A European country allegedly offered to sell attack helicopters, but this never materialised and the Cypriot National Guard opted for the Mi-35P Hind, an export designation of the Mi-24P. Twelve Mi-35P ‘Hind-F’ helicopters entered service in the Republic of Cyprus from August 2001 after its pilots had been trained in Russia by the Russian Army. The Mi-35’s presence in the Cypriot National Guard was initially kept secret until the next year when they appeared in a flypast during a general’s funeral. The squadron became fully operational during that same year. 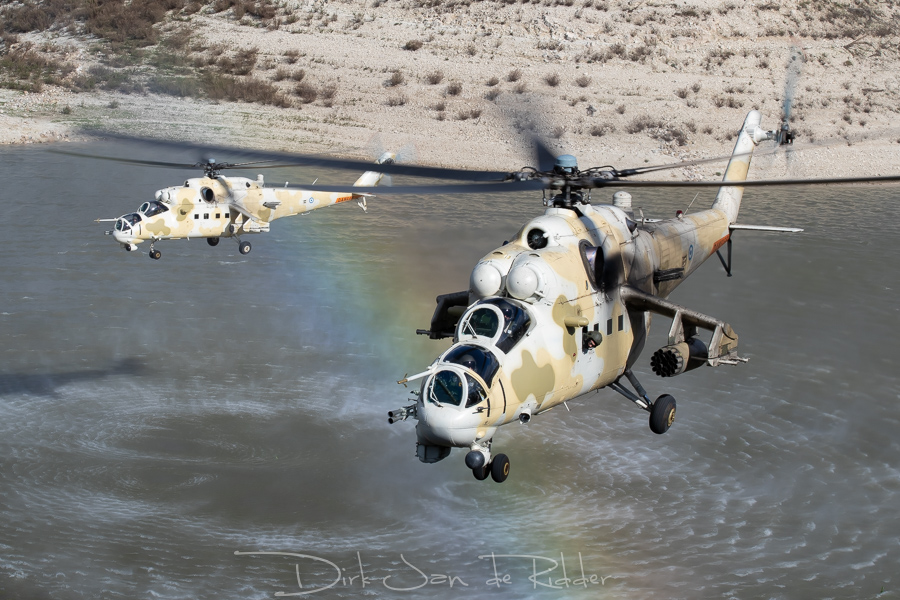 One Mi-35 crashed shortly after takeoff in 2006, killing a Cypriot pilot and his Russian instructor pilot. The remaining eleven helicopter form part of the second Platoon of 450 squadron based at Andreas Papandreou airbase near Paphos, the only airbase still operated by the Cypriot National Guard. At any time, around four are normally airworthy. All eleven Mi-35s were overhauled by the 419th Aircraft Repair Plant at Saint Petersburg during 2014. When they returned to Cyprus they had been painted in a light desert camouflage scheme, in stark contrast with the monotonous dark grey colour scheme in which they were originally delivered.

The SA342L1 Gazelles entered service with the Mi-35 squadron in 2010 when their former squadron based in Nicosia was disbanded, bringing together all airborne attack capabilities of the National Guard in a single squadron. A total of six Gazelles had been purchased in 1987 and delivered from 1988. Four Gazelles remain in service in their original three-tone desert camouflage color scheme. The helicopter can carry up to three passengers, but is mainly used as an anti-tank helicopter.

When Gazelles and Hinds fly together, the Gazelles usually go in front. Their small size and low noise profile make them very hard to detect, especially at treetop level. Its only armament is the MBDA HOT-3 wire-guided anti-tank missile, up to four of which can be carried. It can penetrate 1300mm of steel at a maximum range of 4300 meters. The Mi-35’s 9M120 Ataka anti-tank missile can be launched from a distance up to 5800 meters from the target and it is able to penetrate 800mm of steel. 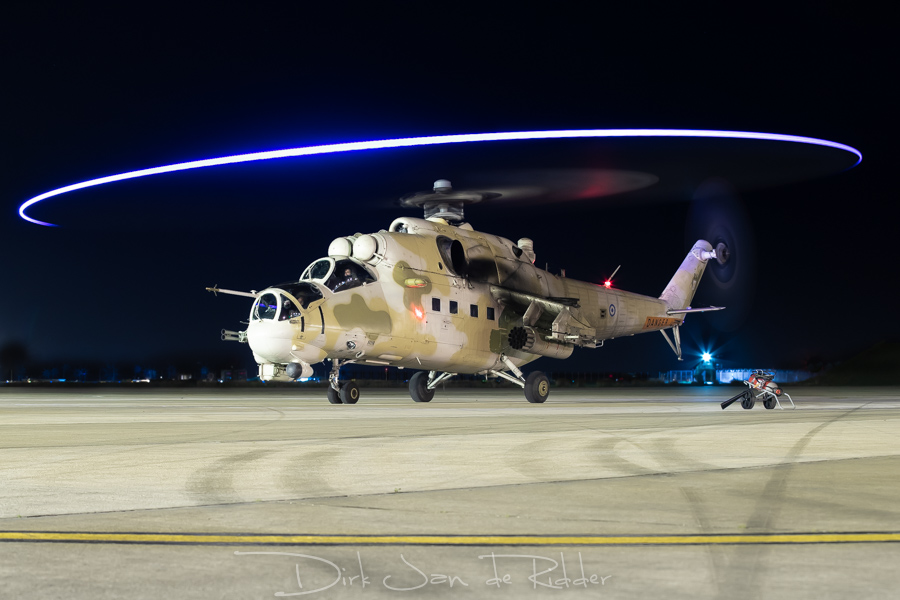 Whereas the Gazelle is a specialised anti-armour attack helicopter, the Mi-35 has various means of attacking other types of targets. This includes the fixed 30mm gun mounted on the right hand side, which is loved by Mi-35 pilots for its precision and destructiveness, but it can be supported by 23mm machine guns under the wings. Both guns carry up to 250 rounds and have a range of up to 2000 meters. Up to 4 rocket pods with twenty 80mm S-8KOM rockets each can also be carried under the wings, or four 240mm S-24B rockets with a fragmentation radius of 400 meters.

Typically, the Cypriot National Guard equips its Hinds with S-8 rockets or nothing at all on the inner wing hardpoint and 9M120 missiles or any other type of armament on the outer hardpoints. The Mi-35P can also transport up to eight armed soldiers, making it the Cypriot National Guard’s largest (and more or less only) tactical transport helicopter. This enables them to also support special operations or carry out combat search and rescue missions. For improved survivability in combat crews rely on exhaust-heat shields, a radar warning receiver, flare dispensers and armour-protected cockpits.

New pilots join the squadron after completing pilot training in Greece, the country’s main ally. Their training syllabus is identical to that of any Hellenic Air Force fighter pilot, including over a hundred hours on the T-2 Buckeye training jet. The tactical aspects taught in fast jet training are considered indispensable, even when they continue as a helicopter pilot. They then enter 450 squadron for flying training on the Gazelle and to gain experience in the anti-tank role. Some pilots initially fly the Bell 206 before continuing on to the Gazelle. Pilots will remain operational on the Gazelle for at least several years, before ultimately converting to the Hind. 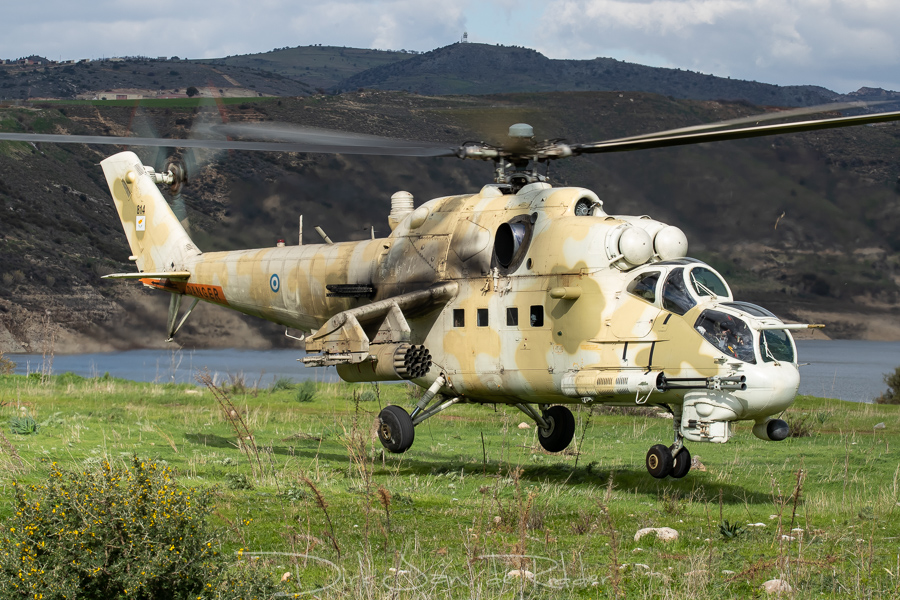 The squadron’s pilots describe their role as mostly defensive, as an attack against Turkish-backed Northern Cyprus would be more or less pointless. The squadron’s official mission though is to conduct defensive, offensive and special operations near or behind enemy lines. Pilots continuously train in destroying or neutralising armoured and non-armoured targets. During AFM’s two-day visit two Mi-35P’s with rocket pods attached were flying both in the morning and afternoon or night. Hot crew changes (crew changes with the engines running) took place an hour into every flight. This enabled eight pilots to fly for an hour every day part. The Gazelles were grounded for a short period due to shortage of spare parts.

In October of 2018 it came to light that the whole fleet of Mi-35s had also been grounded for several months when they did not appear at the annual military parade in the capital Nicosia. This was also due to a lack of spare parts, probably caused by Cyprus freezing bank accounts of Rosoboronexport, Russia’s defence export agency, following American and EU sanctions. The Mi-35s were back in the air by early November, proven by two examples taking part in exercise Dynamic Fist 2018 between 5 and 10 November. This exercise is held annually and is meant to examine how aerial, land and maritime forces of the National Guard deal with conventional and asymmetric threats. Cyprus also regularly hosts international exercises with Greece and Israel. Hellenic Army AH-64 Apaches and CH-47 Chinooks deployed to Andreas Papandreou airbase as recently as October 2018. An annual counterterrorism exercise with Israeli Air Force airplanes, helicopters and special forces units has also taken place in Cyprus since 2016. 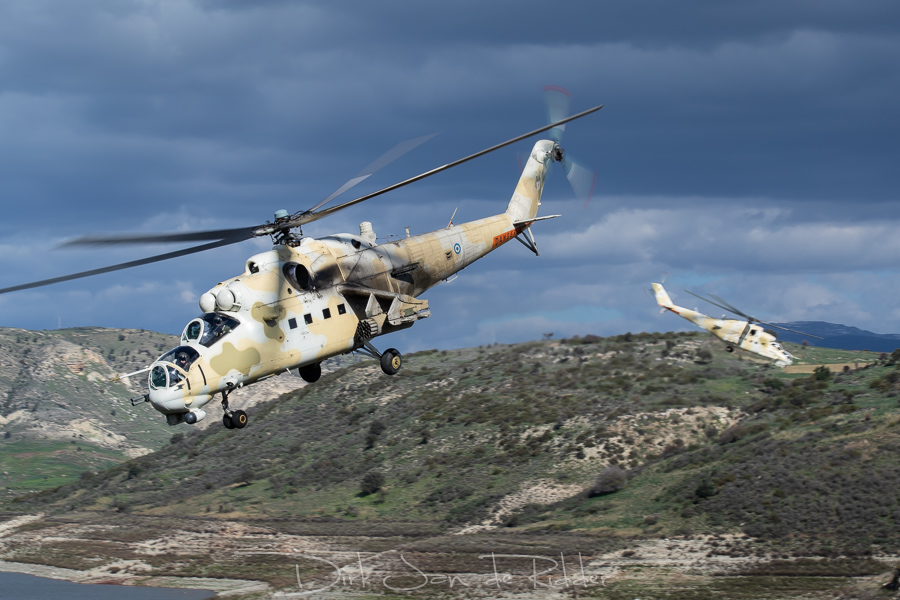 The Mi-35 has a lifespan of 25 years, meaning that it can remain operational until 2026 with just one more overhaul. A somewhat more experienced Gazelle pilot told the author he did not currently see the urge of converting to the Hind as plans are starting to emerge to replace both the Gazelles and the Hinds with a new attack helicopter. This would possibly happen when the Mi-35s are due for their next overhaul by around 2021, which they consider to be very expensive. It leaves no doubt that purchasing whichever new helicopter will also be expensive and the question is whether Cyprus has the budget for it.

The country’s defence budget has more or less remained steady in recent years, but increasing parts of that budget are required to cover increasing payroll costs. The total 2019 defence budget will be over 350 million euro, but the expenditure on equipment will be only 52 million euro, down from 77 million euro in 2018. Cyprus Mail, the country’s largest English-language newspaper, probably described it fittingly: “People, although they may occasionally get carried away by media-generated military hype, are pragmatic enough to know that the National Guard, regardless of how much it invested in arms, could never be a match for the second largest standing military force in NATO.” Until such a situation would become reality, it is up to 450 squadron to pose such a threat that their northern neighbours will never consider that.

A full report appeared in several magazines, including in FLUG REVUE: