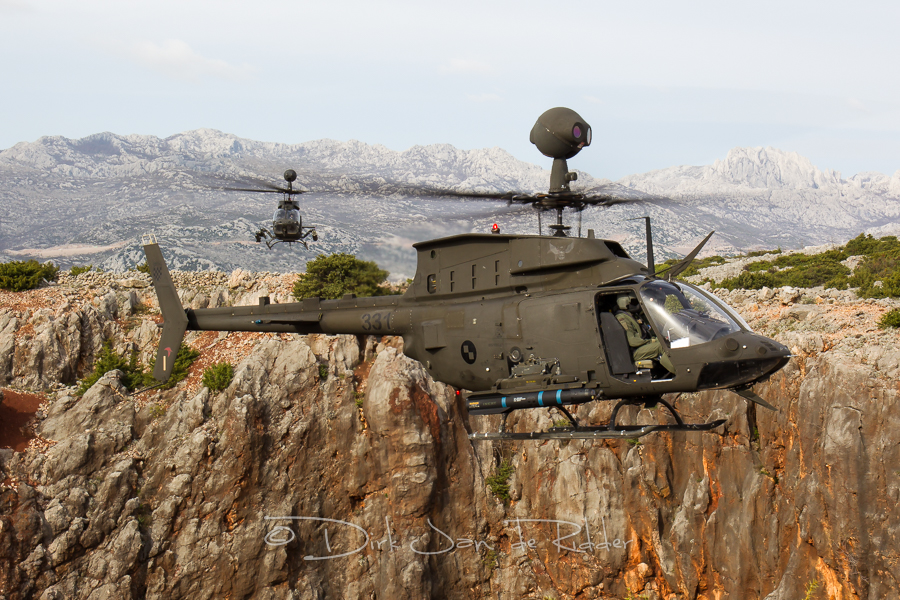 In February 2016, Croatia became the second country after Tunisia to acquire excess Kiowa Warriors from the US Army, shortly followed by Greece. All helicopters, comprising 16 OH-58Ds plus an instructional airframe, were delivered to Zadar-Zemunik airbase during that same year. It took a few months for American instructors to arrive, so in April they started performing trial flights with the helicopters, each time accompanied by a Croatian pilot. The five American instructor pilots then trained eight Croatian pilots according to the ‘train the trainers’ principle.

The Kiowa Warriors are flown by pilots of the Eskadrila Helicoptera (EH, Helicopter Squadron) at Zadar-Zemunik. Although the Kiowa production line ceased in 1989, the helicopters are in a perfect state due to their recent overhaul and upgrade. Some of the airframes were even manufactured with brand new cabins. Lieutenant colonel Krešimir Ražov, squadron commander with nearly 3,000 hours on the Bell 206 and among the first eight pilots to fly the OH-58D, explains: “In 2010 they went through the so-called Wartime Replacement Aircraft program. This covered 49 helicopter, 23 of which were cabin conversion A2D models [OH-58A to OH-58D] and 26 were ‘new metal’ aircraft. Between 2012 and 2014, they started to fly as rebuilt helicopters with new serial numbers and zero flying hours. The KWs [Kiowa Warriors] we received at the end of 2016 had between 120 to 550 hours, so we consider them new helicopters. They were in a very good shape.” 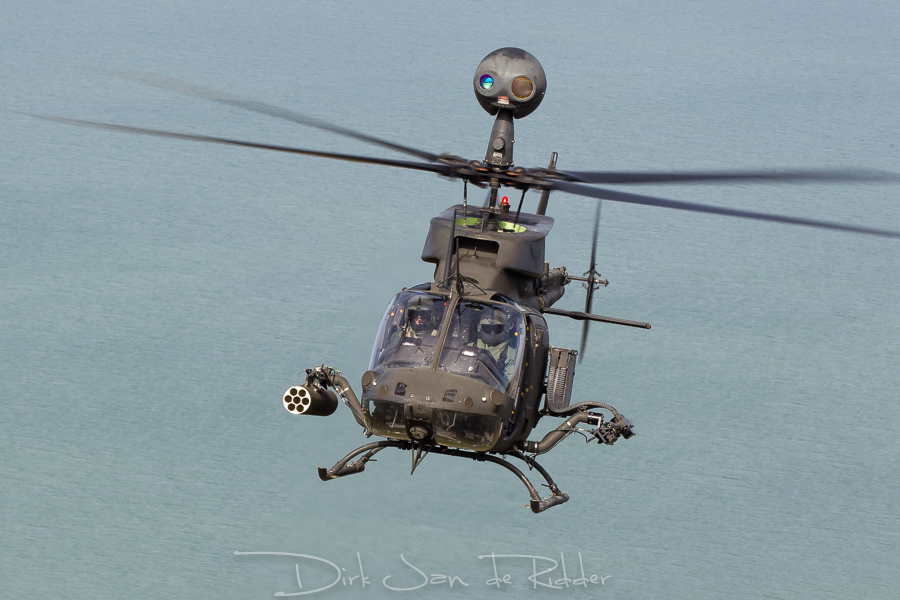 The squadron has operated the Bell 206B in the training role for many years, so conversion to the OH-58D, which is based on the Bell 206 airframe, may not seem extremely complicated. That proved different. Lieutenant colonel Ražov: “Eight of our most experienced instructor pilots started the training and we were surprised. It takes a few hours to get accustomed with the Kiowa Warrior. For example, we didn’t expect it to be more manoeuverable than the Bell 206. Another thing that was new for us was the glass cockpit. All this new and sophisticated equipment was demanding for us, so we needed some 75 hours of type rating on this helicopter. It takes time to start processing the information and then be concentrated on the flying. After these 75 hours of type rating, the training was oriented at mission tactics as a scout weapon team [SWT] during day and night.”

The Kiowa Warrior is the armed version of the OH-58 Kiowa. It was designed for close combat aerial reconnaissance, intelligence gathering, surveillance and target acquisition. In Croatia, the KW will be used in a variety of roles, including anti-armour combat, close air support, very close air support, convoy escort and protection, as well as acting as an airborne C2 (Command and Control) platform. The helicopters can also determine the distance and direction to an intended target and hand it over to field artillery for engagement. Depending on the mission, the KW can be armed with any combination of .50 caliber machine guns, AGM-114 Hellfire air-to-surface missiles or Hydra 70mm rockets, with one type of armament on a weapons pylon on each side of the airframe. Ground crew can re-arm or change the type of armament in a matter of minutes. 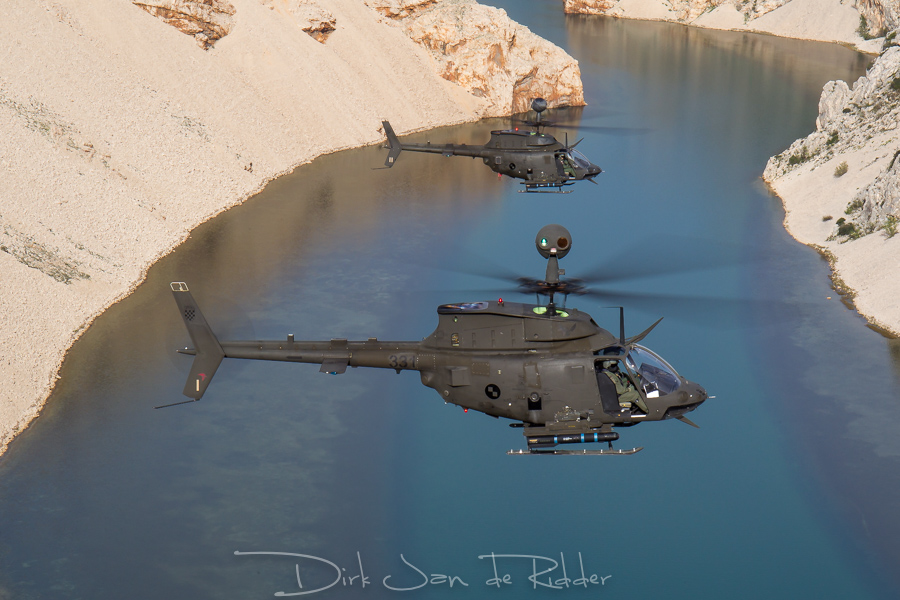 The Mast-Mounted Sight (MMS) is part of the standard equipment of the helicopter. It has a gyro-stabilized platform containing a television system, a thermal imaging system, and a laser range finder/designator offering the ability to search, detect, identify, track, locate and designate ground targets in both day and night environments. Lieutenant colonel Ražov details the tactical use of the MMS: “It can function on the move and while in a hover and it allows us to remain hidden behinds trees or terrain, as we recently demonstrated for the first time during joint exercises with Croatian Army ground forces. We can designate a target, so that another KW, aircraft or UAV can attack it. We train for it a lot with Hellfires, in which case we call it Remote Hellfire Shots.” 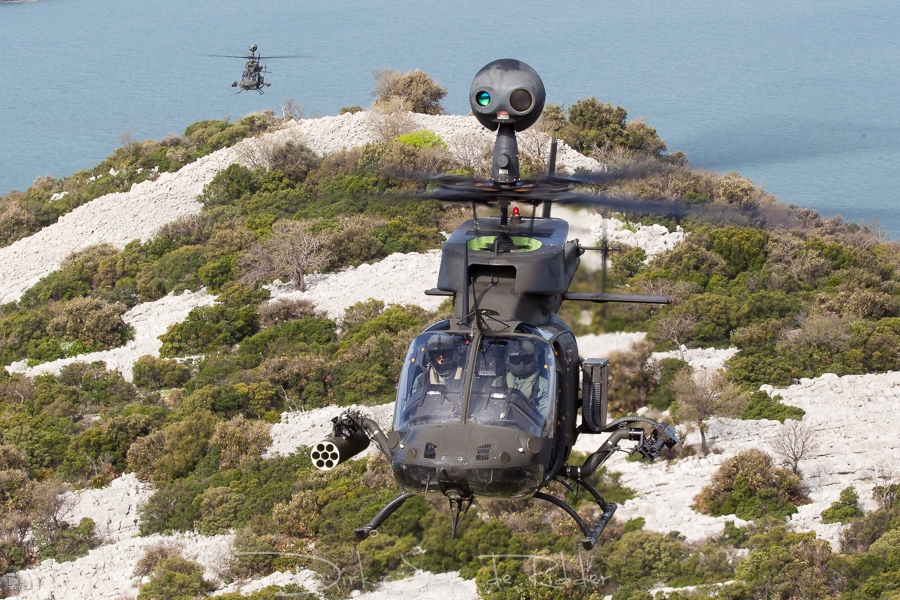 In August 2017 the pilots carried out their first firing training under the watchful eye of an American team of evaluator. It was the first time any of the pilots had fired anything from a helicopter and it marked the completion of their conversion training. It was a true highlight in their carreers, as lieutenant colonel Ražov explains: “We qualified as independent Croatian crews using the .50 caliber machine gun, Hydra 70mm rockets and [simulated] Hellfire missiles with all the required manoeuvres and techniques. For us, the first live firing with the gun and rockets was amazing. First with the [American] instructors, then with the Croatian crews by day and night. After that, the final part was the instructor pilot course, in order for us to be able to train others, and the maintenance test pilot course for four of our pilots. ”

Only the Hellfire air-to-surface missile has not been launched for real yet, for obvious reasons. Lieutenant colonel Ražov: “You have to consider that it is a very expensive missile, costing over 100,000 US dollar. We flew a lot of Hellfire missions, but we have not shot any live Hellfires yet. The Hellfires we have right now are only for training purposes, but the procedure of really firing one and simulating it is exactly the same. Everything is recorded in the software, so you can see whether you are doing it right. With all the preparation, the lock-on before launch and lock-on after launch, launching a Hellfire missile is very challenging. Crew coordination is vital. When we start the live firing [with the Hellfire], the only difference will be the smoke that we see. We will receive them very soon and we will launch them.” 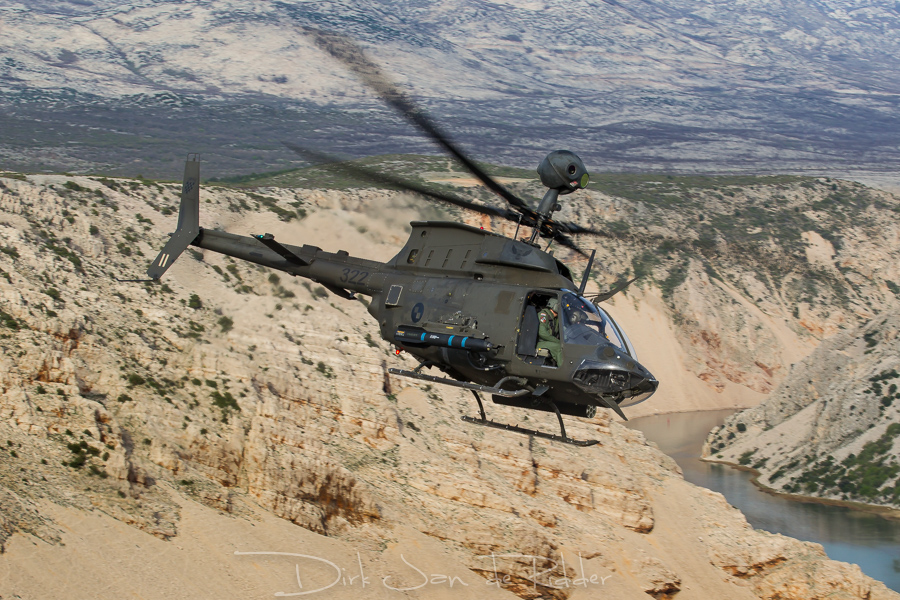 Lieutenant Colonel Ražov continues: “The Kiowa Warrior is a multi-role helicopter that requires two pilots to conduct missions. Without two pilots you cannot do it, especially not in the night environment. It takes a lot of coordination to do the job right. The crew consists of a pilot and a weapon systems operator, but the weapon systems operator is also a pilot. That is crucial. Both the right seat and the left seat are capable to do the same things. As a team we normally fly with two helicopters, so there are four pilots and one of them is the air mission commander, who puts the others in position. It was very demanding to get qualified with all the procedures and requirements of the qualifying sheets.”

The first group of Croatian pilots and mechanics completed their entire training in December 2017, totalling more than 1,000 flying hours over seven months and the squadron achieved Initial Operational Capability (IOC). The American instructors had accomplished their job and returned home. Lieutenant colonel Ražov: “Training with the Americans has brought our capabilities to a very high level. They were very open in what they were expecting from us, they put us in all kinds of situations and they gave us everything they had. We are grateful for that. As pilots, we wanted the American instructors to stay, but the contract was for them to just ‘train the trainers’. They have a lot of combat experience and you cannot learn from that experience by reading. Being in the air and hearing from them why they do something and why they take certain decisions was invaluable.” 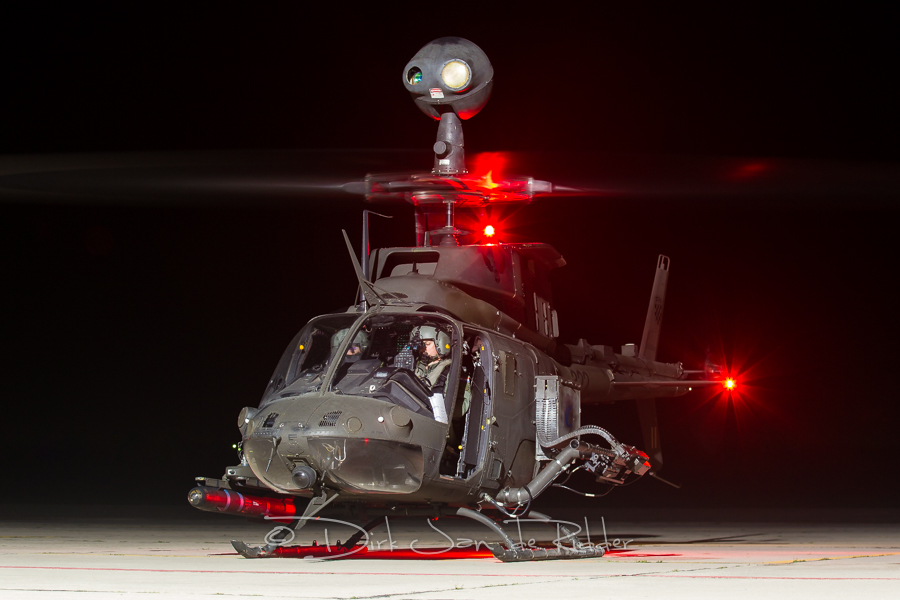 In February 2018, a second group of pilots began flying training under the supervision of the Croatian instructors and a third group will be trained at the end of the year, according to lieutenant colonel Ražov: “The next step is to achieve Full Operational Capability [FOC]. Our instructors are fully capable, but we need to train more pilots to achieve Full Operational Capability. We are very satisfied with how we are developing our mission-specific capabilities, so we expect the squadron to reach FOC at the end of this year.” Current students and instructors on the Kiowa Warrior remain instructor pilots on the Bell 206. The plan is for all pilots to continue to fly both helicopter types. During the current transformation that is challenging, but next year when the squadron is fully operational things will settle down.

What the squadron has achieved in such a short time is a massive accomplishment, especially considering the fact that the Croatian Air Force hasn’t operated any attack helicopters in over twelve years. Its last Mi-24 Hinds were withdrawn from use in 2005. Lieutenant colonel Ražov concludes: “I never expected to be in this position within one year. We are conducting our training and we are now approaching the next gunnery training [for the next group of pilots]. We are providing them full combat training and we are extremely happy to build up our capabilities to this high level.”

A full report appeared in several magazines, including in Ptisi: