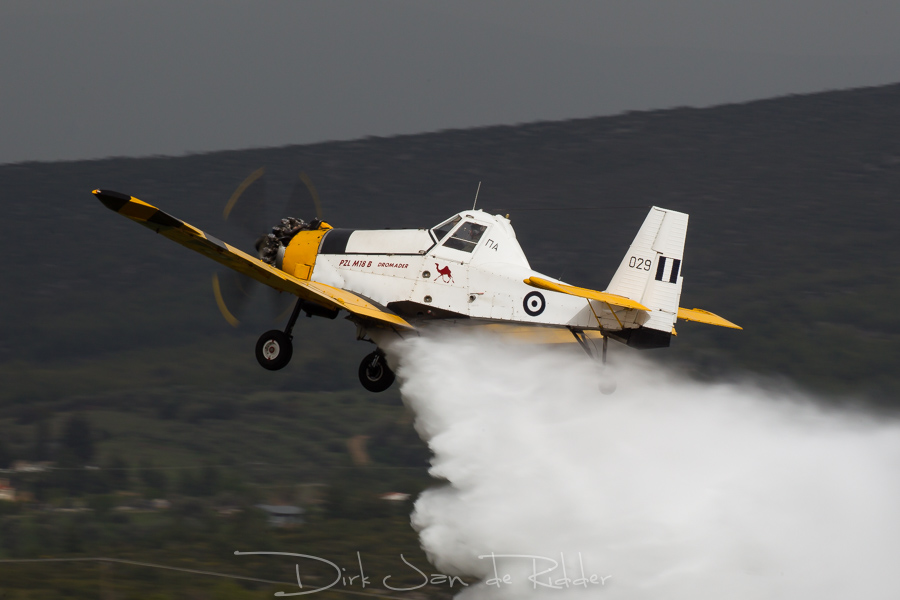 The 359 MAEDY (359 Moira Exipiretisis Dimosion Ypiresion, Public Services Air Support Unit) was established in 1968 and initially operated ten Bell 47 crop dusting helicopters from Elefsis air base, located to the west of Athens. The unit moved to Tatoi airbase, on the northern outskirts of Athens, in 1970. Exactly fifty years on after its establishment, the unit currently operates 22 PZL M-18 Dromader aircraft, three of which are M-18BS double-seat training aircraft. During the Cold War, they were the only aircraft manufactured in a Soviet country and operated by a NATO air arm. Thirty single seaters were delivered in 1983, but the aircraft’s attrition rate clearly shows the dangers of aerial firefighting. Five aircraft were lost in the first three years, plus four more by the turn of the century, so they were supplemented by the three double-seaters to improve training in 2002.

The 359 MAEDY is not the only firefighting squadron of the Hellenic Air Force. For a very short period, it also operated CL-215 Scoopers, but they were transferred to 355 MTM to form their own squadron in 1975. Some eleven CL-215s are still flown by 355 MTM and the firefighting fleet was reinforced with the purchase of ten CL-415 Super Scoopers in 1999, seven of which are still operational with 383 MEEA based at Thessaloniki airport. 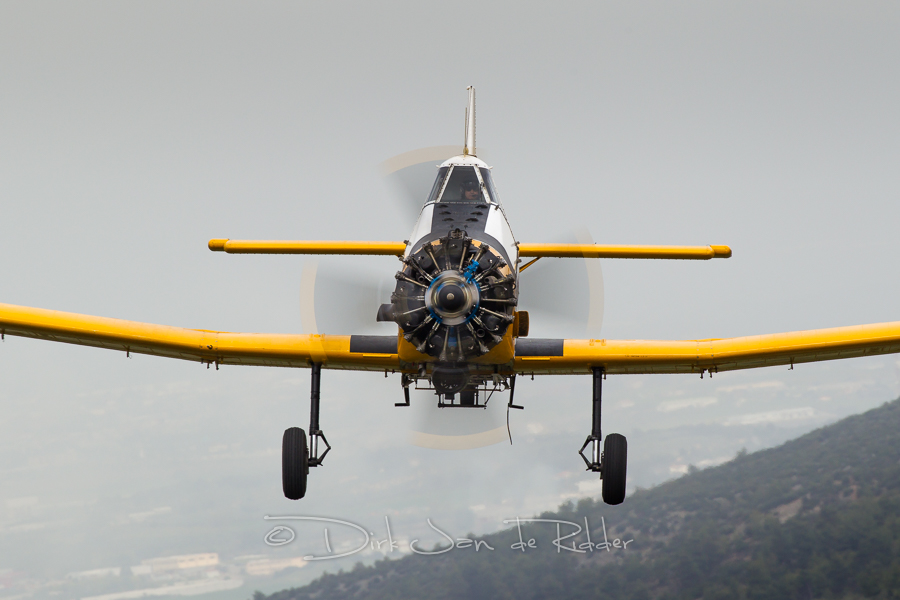 People commonly think that the CL-215 and CL-415 are more capable than a small aircraft like the M-18, but that is not correct, as colonel Iohannis Kaloudis explains: “The PZL [M-18] is a very misunderstood aircraft. The majority believes that CL-415s or helicopters are better to attack fires. Imagine we have a fire on the mainland, relatively close to the airfield and pairs of CL-415s, helicopters and PZLs take off and go to the fire at the same time. What happens? The CL-415s and the helicopters have no water. The PZL can drop it immediately. The time factor is essential and the first attack is our advantage. If there is a fire in your house, do you prefer having a fire extinguisher or having to call the fire department? The PZL is the fire extinguisher. The longer you wait, the more water you need to extinguish the fire. The CL-415 first has to find a calm surface of water to land on and come back. It takes 30 minutes, sometimes up to one hour. In the same time space, the PZLs will make three or four attacks.”

“Also, CL-415s and helicopters drop the water in a pattern length. Our aircraft is really targeting the fire. We use 5 to 10 degree dive angles with surgical accuracy at a release altitude of just ten meters. I can drop the water in a garden without destroying the buildings around it. It is a bomb of 1.5 tons [approaching the fire] with the velocity of the aircraft. The effect is the same as doing three or four water drops from 40 meters. From that release altitude, the water will be sprayed.” 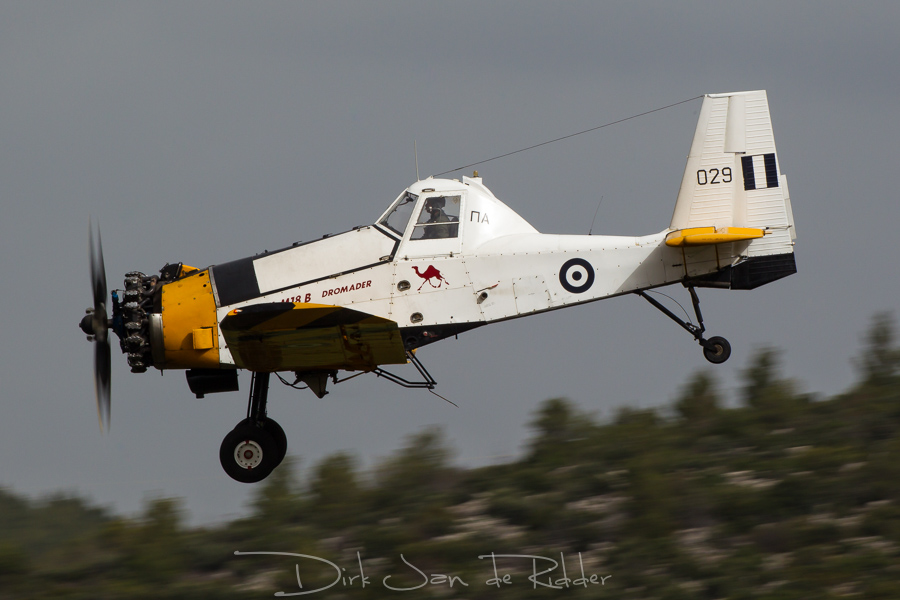 A year is roughly divided into a six-month training and recovery period from November to May and a firefighting period in the remaining months. Maintenance and other inspections are normally planned off-season, so that each and every aircraft is available during the firefighting season. The unit then abandons its homebase, by sending its aircraft in pairs to about eight airfields around the country. The exact locations vary every year, but in recent years they have included Amygdaleonas, Corfu, Epitalio, Kalamata, Kefalonia, Lamia, Lesbos, Sparti and Tripoli. From there, they operate from sunrise to sunset. With all pre-flight checks carried out early in the morning and with water and fuel tanks filled, pilots can be airborne in about ten minutes. The unit’s main goal is to prevent fires and extinguish them early on, rather than fighting against big fires. For this reason, the aircraft also carry out preventive surveillance flights with a water load when requested by the fire department.

Last year was the worst year in a decade with the Dromaders logging well over 2,000 flying hours working on fires. He continues: “There was a spotfire at the island of Corfu in August, some ten miles north of the airport. We took off to find the fire area and we dropped the water. Firefighting personnel on the ground asked us to refill and make another drop. On the approach to the airport, we overflew Dafnila [a tourist area with several hotels] and everything was fine there. When we took off again, there suddenly was a big fire. The tourists at the hotels were panicking as there was no way out because of the smoke. I told the fire department we were going to this new fire. We made twelve water drops with two aircraft. The chief of the fire department in Kerkyra [the island’s capital] had already requested reinforcement because it was a big fire. A CL-415 soon took off from Andravida and landed three hours later, but the fire was already extinguished and the people at the hotels were unharmed. The PZLs did the job without any help, because we are all over the country in order to make the first attack. Eighty to ninety percent of wildfires are extinguished by PZLs or ground personnel. In the media, you only hear about the ten percent.” 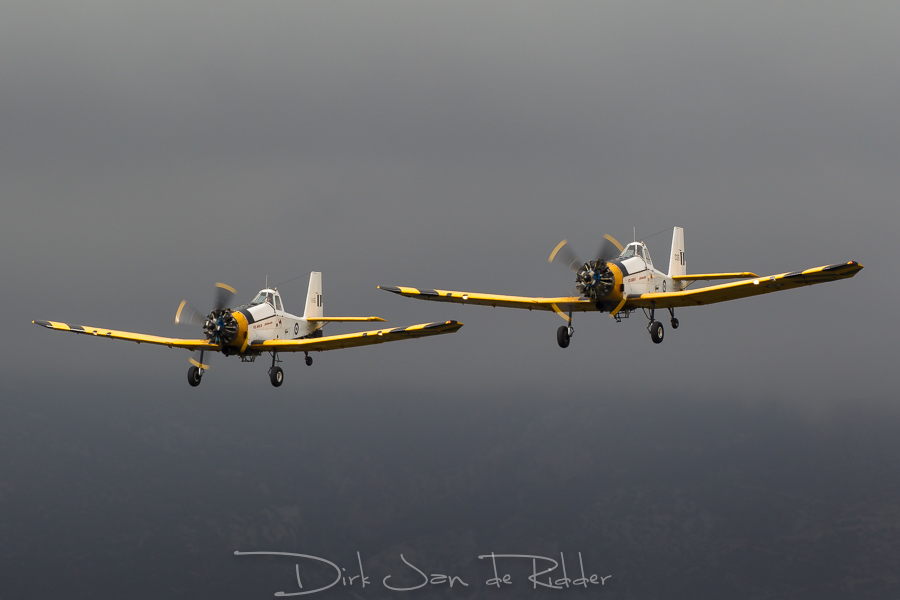 You will hardly find any pilot under the age of 40 in the unit. Flying the M-18 in the firefighting role requires a lot of experience. Most pilots coming to the unit have a long carreer behind them flying fighter jets. Some of the senior staff have flown a variety of aircraft such as the CL-215, F-4, F-5, P-3, T-33 and even the C-47 Dakota (that remained in active service until some ten years ago). Newcomers start their flying training on the M-18BS double-seater with an instructor sitting in the front, because the rear seat better resembles the pilot’s position in the single-seater. In perfect weather conditions the conversion training can be completed in about a month.

One of the most difficult things to learn is to land the aircraft. Most aircraft require the pilot to pull the stick back during landing, but an M-18 pilot needs to push the stick forward in order to land using the front wheels. Push it too far forward though and the propeller will hit the ground causing the aircraft to crash. It is very difficult to make a perfect landing, especially because the wind is very effective against the aircraft. After mastering takeoff and landing, they will learn to handle the limits of the aircraft and they complete the course with operational training. The latter comprises carrying out water drops, all of which are solo flights. The M-18BS has a small water tank, but in practice the aircraft is so close to its maximum takeoff weight with two pilots on board that it makes no sense to use it for water drops. Various ground targets are in use and new pilots gradually build up their confidence hitting the targets with increasing amounts of water, while working their way down to an altitude of 10 meters. 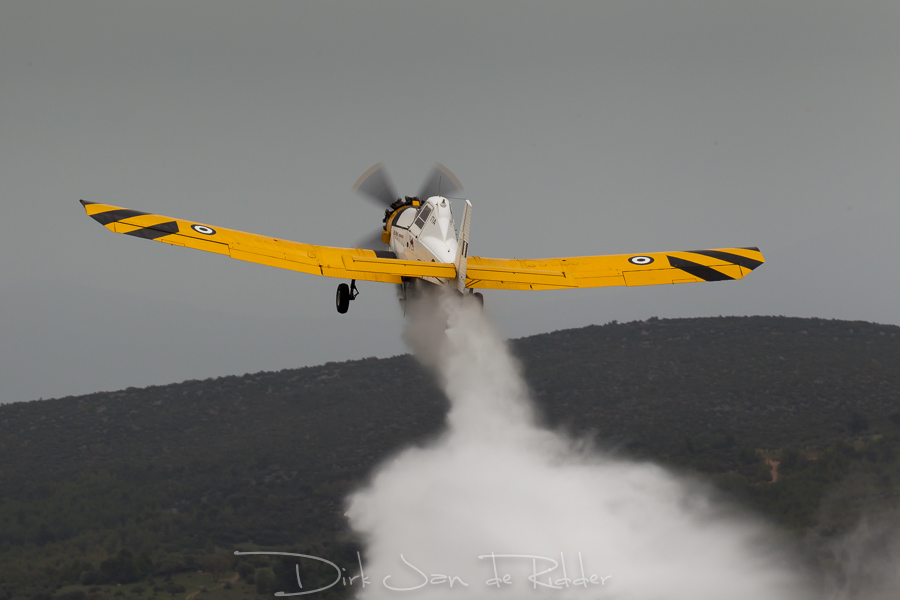 The M-18B has a water capacity of 2,500 liters, but the aircraft usually takes off with 1,500 liters because of takeoff weight limitations. As the plane consumes fuel and its weight reduces, the amount of water carried is gradually increased. The water tank is installed in the nose and the pilot can actually see the water through a little window with marking points showing the amount of water available. A full water drop takes around one to two seconds to leave the aircraft, but the pilot also has a possibility to make a fireline which takes around 7 to 10 seconds. This is mainly used in case of smoke without flames. Right next to the water tank is the tank with flame retardant foams. Depending on the fire, before each water drop the pilot can select to add 3, 9 or 17 liters of foam to the water. The foam is always used, except when there is only some smoke or if the fire is under unburnt trees. In the latter case with foam the water would simply not reach the surface.