Turkish Army helicopters made headlines during the military coup attempt that took place on 15 July 2016. Besides Turkish Air Force F-16s and KC-135s, coup plotters used Army Aviation Command AH-1 Cobra helicopters based at Ankara-Güvercinlik, as well as Black Hawk, Huey and Cougar helicopters from Bodrum to attack several military and political targets. Bodrum-based Cougar and Black Hawk helicopters deployed Special Forces to the hotel where president Erdoğan was staying. The plotters deployed large numbers of troops and heavy armour in both Istanbul and Ankara while Turkish Air Force F-16s executed show-of-force flights over Ankara where they strafed the city centre at low-level with full afterburners deployed.

After only a few hours it was clear that the plotters did not get the anticipated support for the coup and forces loyal to president Erdoğan took back control of the situation before dawn, supported by masses of Erdoğan supporters that went to the street. Within days after the failed coup, almost 3,000 military personnel had been detained and 2,745 judges were removed from duty. It is hard to say what the longer-term implications of the purge will be, so this article focuses on the situation from just before the coup attempt.

In 1948 the Kara Ordusu Topçu Havaciliği or Army Artillery Aviation section was formed. A number of ofﬁcers from artillery regiments were sent to the Türk Hava Kurumu (Turkish Aeronautical Association) for flying training. The THK is a civilian organisation set up in 1925 by Mustafa Kemal Atatürk to promote interest in aviation and is still very much alive today. Initially the Topçu Okulu Hava Grubu (Artillery School Air Group) operated out of Polatli, but in 1958 the Army Aviation Headquarters and Flying School were moved to Ankara’s former civil airﬁeld of Ankara-Güvercinlik. One year later the Flying School was renamed to Kara Havacilik Okulu (Army Flying School). Eventually, the aviation component became more and more important and from 2003, the Turkish Army Aviation Command went through a drastic reorganisation. In that process it gained the status of an independent command reporting directly to the Army headquarters. Four air regiments were created at Ankara-Güvercinlik, Malatya-Tulga, Izmir-Gaziemir and Istanbul-Samandira. Besides these four regiments, the Army Aviation Command utilizes a number of subordinate units that operate out of satellite locations.

To sustain an Army Aviation Command, new recruits are constantly needed. With the high operations tempo in Turkey, there is a constant need for qualified and certified pilots. Each year 300 to 400 recruits apply for a pilot position in the Army but after going through the pilot selection system, an average of 140 start with basic flying training. This number is limited not only by the qualifications and the outcome of the pilot selection system, but also because the Army Aviation School is currently at its full flight capacity, Güvercinlik cannot practically host any more flights.

Before the recruits are allowed to enrol in any of the classes of the Army Aviation School, they first have to graduate from the Army College where they undergo tests in flight simulators to determine their piloting skills. The pilot selection system selects the candidates that can enrol into the School but it does not give an advice for what career the aspirant pilots should pursue. All pilots have to follow the same basic training course which involves initially flying the fixed-wing Cessna T182T, then the AB206R and the UH-1H Huey, while the T-42A and Cessna 421B follow at a later stage in the training. 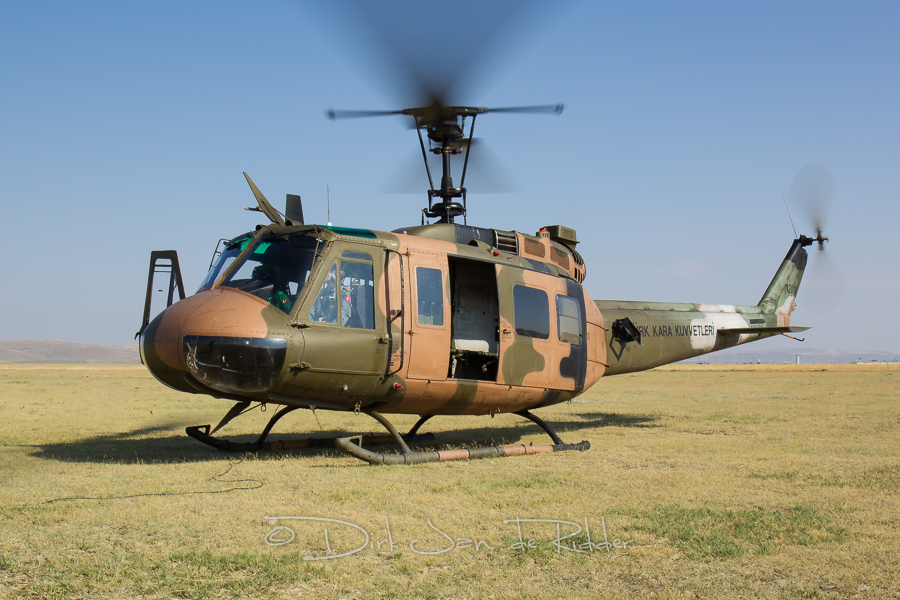 With an average of over 100 flights per day, the relatively small area of Güvercinlik air base is buzzing with activity. Due to its very close proximity to the ever-expanding city of Ankara, flights are putting a high pressure on the surrounding environment. Specific training areas for tactical flying had to be sought further afield and forward operating bases are used to take the pressure off Güvercinlik.

Turkish Army Aviation commanders sought for a solution and they found an ideal location to move the Turkish Army Aviation School to, Isparta Süleyman Demirel, 320 km to the south-west of Ankara. Isparta is ideally located with the Mediterranean Sea 115 km to the south and because it is surrounded by mountains, all sorts of training scenarios can be played out without putting pressure on the human population. Furthermore, the Mountain Commando School of the Turkish Army is located here which makes for realistic training scenarios. The plans to move the Army Aviation School away from Ankara became more concrete around 2010 and plans were made to make the move a reality.

Since the start of the building process in 2012, a new runway, parallel to the 23/05 runway used by the civilian airport has been constructed at Isparta. As part of the $150 million project, Koçoglu takes care of the construction of the Army Aviation Command headquarters building, three hangars (for helicopters and fixed-wing aircraft), four helipads, two runways, a maintenance centre, as well as other educational buildings and dormitories. The project is still in full swing and is expected to be completed in the second half of 2016, but the current complications might well push this date back. Only the Army Aviation School will move to Isparta. All other operational units, including their helicopters, fixed-wing aircraft as well as the Jandarma helicopter command that is located at Güvercinlik, will remain there.

A number of lessons learned were incorporated which resulted in changes to the layout of the airfield compared to Güvercinlik. Isparta will have more helicopter landing pads than Güvercinlik, which allows for more concurrent training flights. It also has two autorotation panels, instead of only one at Güvercinlik. Due to the move to Isparta, the Army Aviation School is able to host and train more students. Although the number of students will increase, the number of aircraft at the disposal of the school will stay the same. The flight training syllabus has also been changed to include flights over sea and tactical flying as part of the basic rotor wing pilot course.

To not interfere with the civil aviation traffic using the adjacent Süleyman Demirel aiport, the Army Aviation School will get its own controlled traffic region (CTR) with a dedicated control tower overlooking the helipads and the runway. Although more are needed, two forward operating bases are already present in the vicinity of Isparta. Çardak, a Turkish Air Force reserve base is located 60km to the east of Isparta. Another one is farther afield. Some 250km south-west is Bodrum-Askeri, an airport that was taken over from the Turkish civil aviation authorities in 1998 with a huge training area adjacent to the air base. These will be used for specific training purposes like fixed wing basic training, special operations, mountain training, NVG training and tactical flying.

The actual move of the assets to Isparta is a monumental task. All flight instructors, mechanics and support personnel as well as over 50 planes and 100 helicopters need to be transferred. Isparta can initially accommodate approximately 450 students and personnel but these figures can increase to as much as 1.200. Isparta will, just as Güvercinlik, be commanded by a brigadier general which indicates that it will become an army aviation regiment in its own. 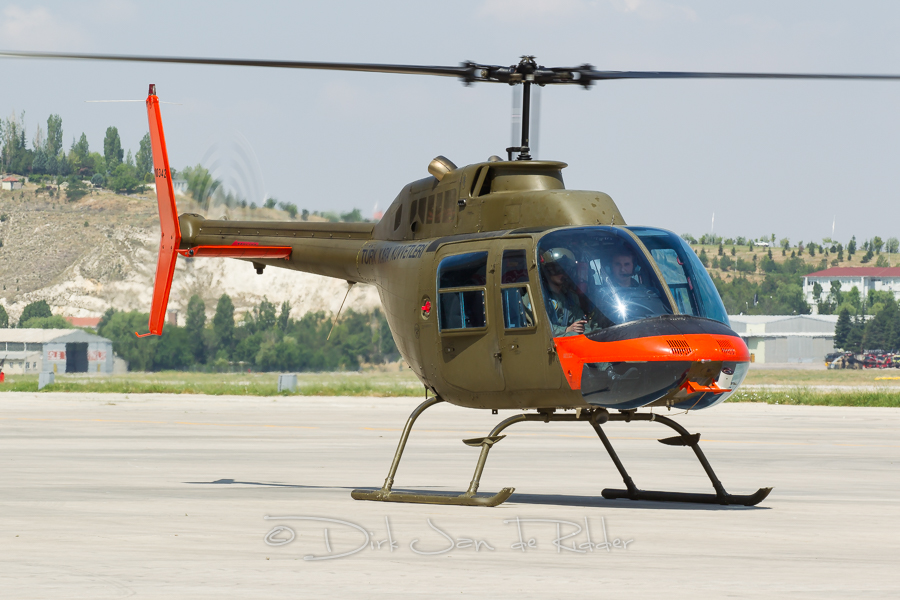 Inspired by the US Marine Corps (USMC), the Army Aviation School has adopted their doctrine to train all pilots in both fixed wing as well as rotary aircraft. All students start with the fixed wing course on the Cessna T182T Turbo Skylane and after graduation they will move on to the rotary section where they will fly the AB206R and Huey respectively. Only when they pass the solo flight in the AB206R successfully, they will learn to fly heavier helicopter types, typically the AB205 and UH-1H. Once graduated on the Huey, the selection is made if a pilot will be a fixed-wing or rotary-wing pilot. Rotary-wing pilots move on to the advanced helicopter training on the S-70A-28D Black Hawk and AS532AL Cougar, while fixed-wing pilots will go to the Cessna T-42A and Ce421C and on to the Beech 200. Some helicopter pilots with specific talents get the chance to operate the (Super) Cobra and T129 ATAK attack helicopters.

In the last few years the Turkish Army has modernized and standardized its equipment. Under the Helimod I and Helimod II programs, the Huey, Cougar and Black Hawk fleets were upgraded and a number of older types were replaced by new types. The Cessna U-17B and Cessna T-41D fleet was replaced by the CeT182T Skylane of which 46 were delivered between Mach 2009 and August 2010. The Bell OH-58Bs were withdrawn from use, leaving only the Bell 206R in the basic helicopter training role. Due to the delay of the introduction of the T129 in the Attack helicopter role, three additional AH-1W Super Cobra helicopters were delivered from USMC stocks in September 2012. In June, the first CH-47F Chinook heavy-lift helicopter was delivered, introducing a new capability for the Army.

It remains unclear what happened exactly during the coup attempt. Rumours are that a huge number of helicopters that were present at Güvercinlik were damaged or destroyed by the attack helicopters that returned from the assaults over Ankara. A Black Hawk helicopter with eight military personnel on board defected to Greece, the occupants requesting asylum. Some helicopters are reportedly lost after being used by coup plotters that fled into the Turkish countryside and left the helicopters behind. Despite the many rumours, some facts can be substantiated with pictures and video accounts and it is clear that Army aviation assets were used by the coup plotters. Apart from the material loss that might have been inflicted, the Army Aviation Command suffered a huge blow because many officers and cadets were either arrested or discharged. With so many personnel leaving the Army ranks, it is to be expected that many years will pass before a full recovery can be expected. A massive reorganisation to prevent future coup attempts seems highly likely. The events that unfolded on that single night will undoubtedly result in the biggest changes to the Turkish Army Aviation Command in recent history.