Train to Win – Lakotas at Hohenfels

It has been ten years since Eurocopter (now Airbus Helicopters) won the US Army’s Light Utility Helicopter program with its EC145, known as the UH-72A Lakota in the US Army. Meant as a replacement for the UH-1 Iroquois and OH-58 Kiowa in non-combat environments, the EC145 was selected for its economical aspects and ease of operation. Fast forward to 2016 and over 300 Lakotas are operated by US Army units in the United States, the Caribbean, the Pacific region and Europe. Only a third of the Lakota fleet is flown by active duty US Army units (rather than by Army National Guard units). One of these, the Joint Multinational Readiness Center at Hohenfels, is the only operator of the type in Europe.

The first five UH-72 Lakota helicopters arrived at Hohenfels in April of 2010. Although Hohenfels is located a mere 100 km from the primary EC145 manufacturing facility of Donauwörth, all the US Army in Europe’s UH-72s were produced at the Airbus Helicopters facility in Columbus, Mississippi before being airlifted to Ramstein airbase and flown to Hohenfels. 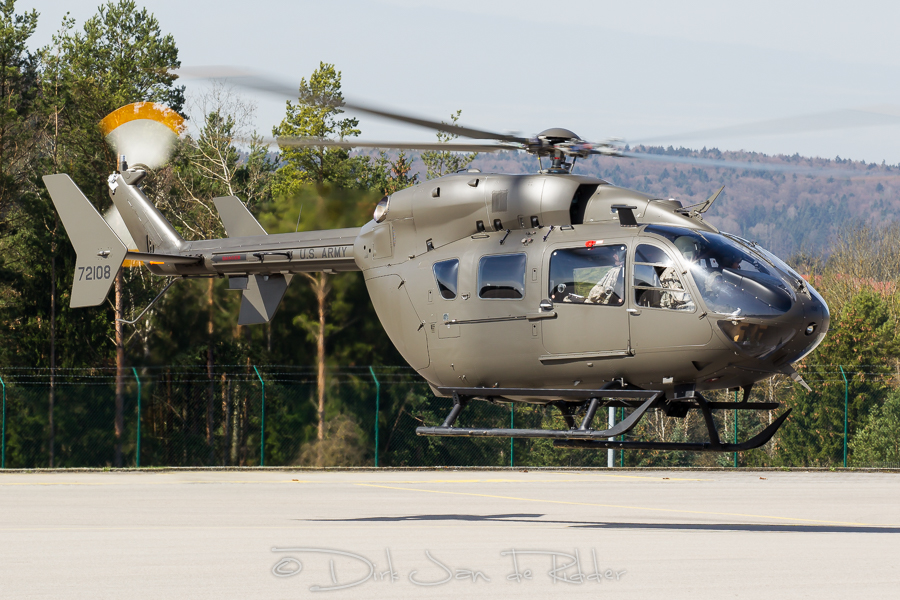 Hohenfels Training Area is the only combat training center of the US Army outside the United States. It has 1345 buildings for training, 319 kilometers of road and a small airfield named Hohenfels Army Air Field with a 2,000 feet runway. This is where Falcon Team, JMRC’s helicopter component and one of 15 OCT (Observer Controller Trainer) Teams, is based. It operates eight Airbus Helicopters UH-72A Lakota helicopters.

The Lakota replaced the Huey about five years ago. The latter has less advanced navigation and communications systems and is significantly noisier than the Lakota. In return it had more space for passengers, but the helicopter’s capabilities were not as important given its non-combat role. Captain Saldana, a fixed-wing pilot currently flying the Lakota with Falcon Team: “The Lakota is relatively easy to fly. We needed a helicopter that could be flown by multiple aviators. This team is made up of Apache pilots, Black Hawk pilots, Chinook pilots. There is multiple people that are brought here because of their background and experiences, so we needed a common platform that didn’t take long to train in. The sole purpose [of this helicopter] is to follow the crew in the helicopter that we train. It didn’t need to have the power, the range and the weapons systems that other helicopters have. A Lakota costs roughly $4 million, where a Black Hawk or Apache costs up to $30 or $40 million.” Converting to the Lakota takes an experienced helicopter pilot around five weeks, plus four weeks of mission preparation, both of which take place in the United States.

The UH-72A accommodates a crew of two plus eight fully equipped soldiers, or two NATO standard stretchers plus two medics. The high position of the tail rotor allow fast loading and unloading through the rear-fuselage clamshell doors, making it an ideal helicopter to train medical evacuation. This is frequently practiced with US forces as well as with allied nations, including with Bulgarian and Czech ground troops recently. Medevac training typically comprises both ‘hot and cold loads’ with the Lakota as well as with a Black Hawk helicopter detached to Hohenfels for real medical evacuations. A cold load is when patients are loaded with the engines shut down, a hot load takes place with the engines running. In the medevac role the Lakota is equipped with two NATO standard stretchers, a medical storage kit and an environmental control unit (ECU). Falcon Team has one flight medic and the Black Hawk crew detached to Hohenfels has its own medics as well.

Falcon Team’s main role is to observe and control the large-scale exercises being held at Hohenfels. Captain Saldana: ”As a pilot or co-pilot, I am not only flying the aircraft, I am also observing. I can be in a Lakota 2,000 feet above an Apache observing everything it does. We also have pilots in the flight operations room, observing the positions of every aircraft and monitoring who is being shot at.” 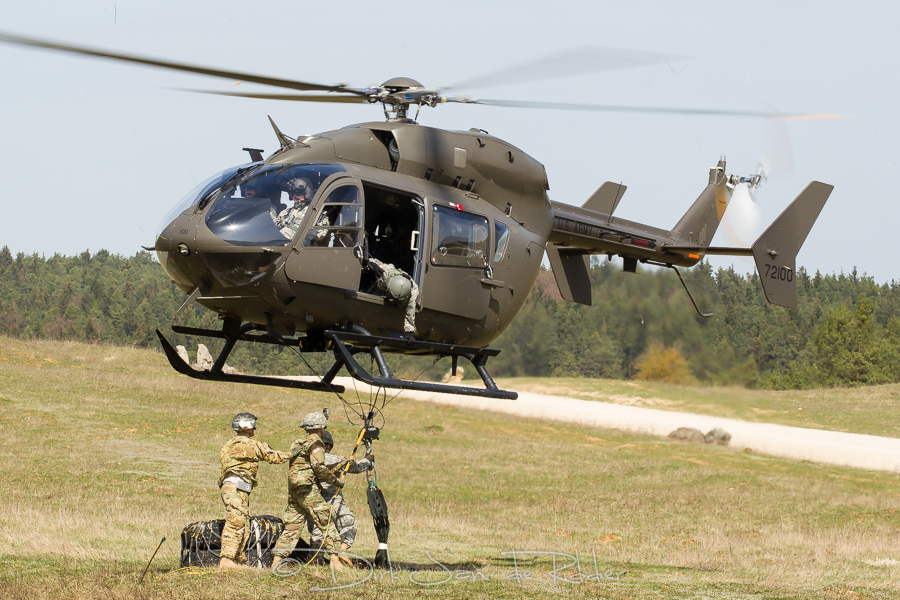 The US Army operates the helicopters in two color schemes. Captain Saldana: “The green Lakotas are typically used to represent blue forces. Then we’ve got what we call the ‘bruised bananas’ in the yellow and brown camouflage. They represent the red forces, or the bad guys. If we are just observing other units training, we are white air [neutral]. If the other unit is simulating being a bad guy then I would fly as red air to train the enemy trying to find and attack the helicopter. As an OC [Observer Controller] I am still only observing what he does and how he reacts.”

Another important role is OPFOR, the simulation of being an opposing force. These missions are flown by Apache pilots. Captain Launger, who recently joined Falcon Team after flying the Apache in Korea, explains: “There is a lot of Apache guys out here, so we have the experience to notionally make a Lakota an Apache. We will simulate having an x amount of Hellfire missiles, rockets and the 30mm gun. We will fly it using the same tactics and techniques we would in an Apache, but we don’t have the ability to fire anything. It all has to be dictated. So we would say we attacked a tank with a Hellfire and then the OC on the ground or the command post would confirm that we killed that tank and it would be out of the game.”

During my visit exercise Sabre Junction 2016 was about to kick off. With 5000 participating soldiers from 16 nations, this forms one of Europe’s biggest military exercises, designed to evaluate the US Army Europe’s readiness to conduct operations. Exercises at these scale are supported by helicopter units from the United States Army Europe, as well as by stateside units. Saldana: “The missions are generally taken care of by rotating helicopter units. For Sabre Junction, we currently have eight Apaches from Ansbach [Germany] and some twelve Black Hawks from Fort Hood, Texas temporarily based at Hohenfels. For example, if a ground element says they need to have an air assault, then Black Hawks will go and fly those missions to train the troops on the ground. Another thing we do is the KFOR (Kosovo Force) mission readiness exercise. Those units don’t have their own aviation assets, because their helicopters are already prepositioned in Kosovo. That is when we will come in and play whatever role needed, but what we can do is very limited because of the small aircraft.”