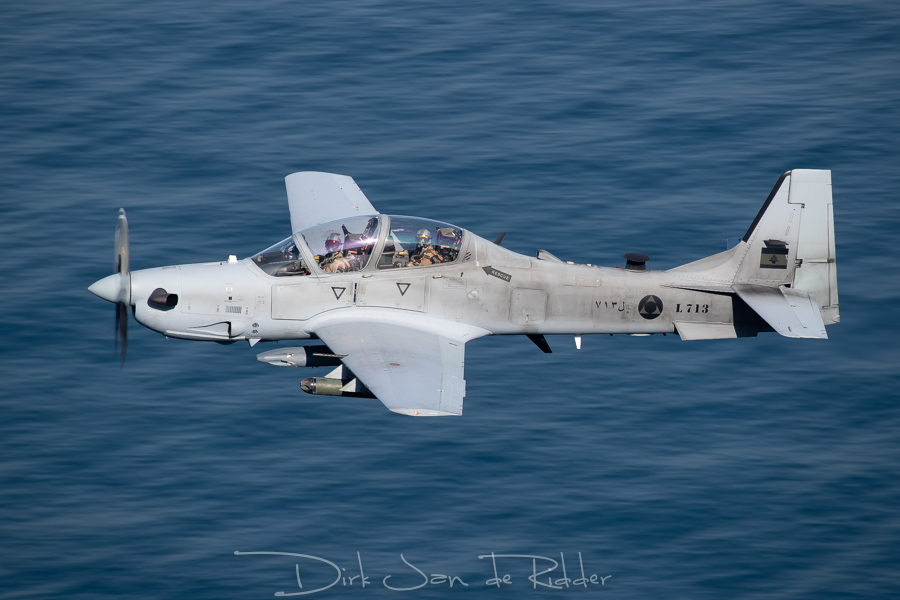 In June 2015, the US government approved the Foreign Military Sale of six A-29 Super Tucano aircraft and associated equipment, parts and logistical support to Lebanon for an estimated cost of $462 million. The deal included two spare PT6A-68A turboprop engines, eight ALE-47 Countermeasure Dispensing Systems, 2000 Advanced Precision Kill Weapon Systems, eight AN/AAR-60(V)2 Missile Launch Detection Systems, ferry support and personnel training in the United States. The first ‘in seat’ training sortie of a Lebanese pilot was conducted with an 81st Fighter Squadron instructor pilot at Moody Air Force Base, Georgia, in March of 2017. Upon completion of the program, 12 pilots and some 20 maintainers stood up their own fully functional A-29 squadron at Hamat airbase in Lebanon.

Hamat Air Base was constructed in the mid-1970s as a civilian airport, but never used as such. Until 2017 its only residents were the Puma helicopters of 9 Squadron, that could continue to operate from there despite numerous holes in the runway (possibly due to Israeli airstrikes in 2006). The runway has since been resurfaced, paving the way for the first two twin-seat A-29B Super Tucanos to arrive in October of 2017, forming the beginning of 7 Squadron. The remaining four aircraft followed in May 2018, just days after the second Lebanese pilot training class graduated at Moody Air Force Base. 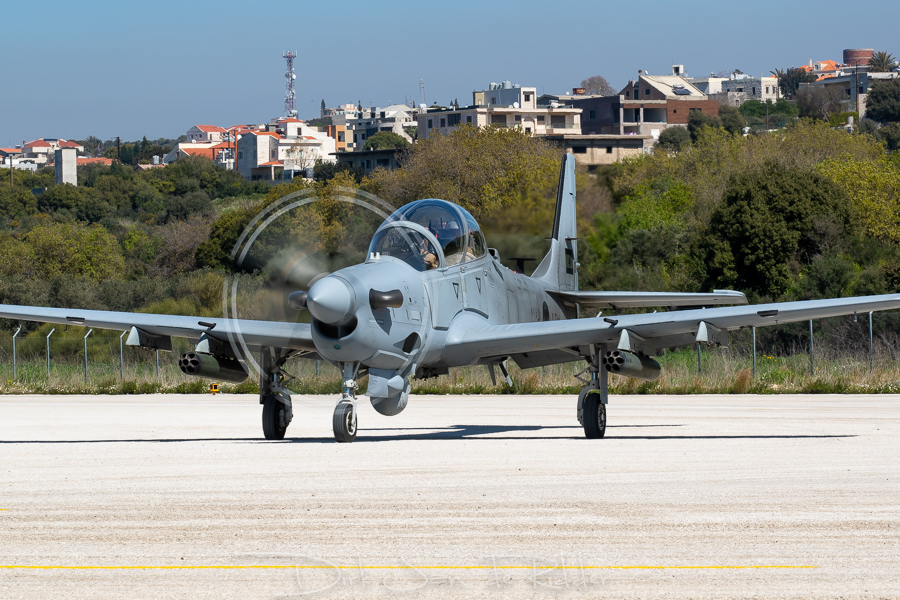 The Super Tucano more or less replaces the Hawker Hunter that was ultimately retired in 2014 due to a lack of spare parts for the ejection seat. Although it lacks the Hunter’s speed, the A-29 is a far more potent prospect on many levels. It was designed for close air support and counter insurgency from the ground up and at a cost per flying hour slightly lower than the Puma, it incorporates fourth-generation avionics and weapons systems while being much faster, more maneuverable and therefore better able to evade enemy fire. Commander of the Lebanese Air Force brigadier general Ziad Haykal even said the aircraft provide a “value to the LAF capabilities not previously found in the national air force”.

None of the current Super Tucano pilots have previous experience on the Hunter. Only the highest-ranking officers used to fly the few airworthy airframes during the aircraft’s final years. All Super Tucano pilots do have previous experience on the AC-208 Combat Caravan, a militarized Cessna 208B and the only other fixed-wing asset in the Lebanese Air Force. It was heavily used in the fight against Al-Nusra and ISIS terrorists from 2013. Pilots told the author they launched many AGM-114 Hellfire missiles during their time on the Combat Caravan. It is the aircraft’s only and very expensive weapon. Besides the AC-208, the Lebanese Air Force was an all-helicopter force before the A-29s arrived. The only other assets used in ground attacks are the Gazelle helicopter equipped with anti-tank missiles and multi-role IAR330SM Puma helicopters, which were donated to Lebanon by the United Arab Emirates in 2010. The latter have locally-modified wing stubs equipped with the gun of the Hawker Hunter and rocket pods of the Dassault Mirage 3.

Lebanese pilots are typically trained on the PC-9 in Saudi Arabia or the T-6 Texan II, some even on the T-38 Talon as well, in the United States, before returning to the Lebanese Air Force with their pilot wings. The training of Lebanese A-29 pilots and maintainers with the 81st Fighter Squadron at Moody was only meant to get the squadron started. New pilots are already being trained by Lebanese instructor pilots at Hamat. The only thing lacking now is a simulator, for which pilots will continue to travel to Moody Air Force Base as there are no plans to buy one. About a dozen USAF ground personnel still support the squadron in various positions, but the squadron already is and will remain completely self-sufficient. 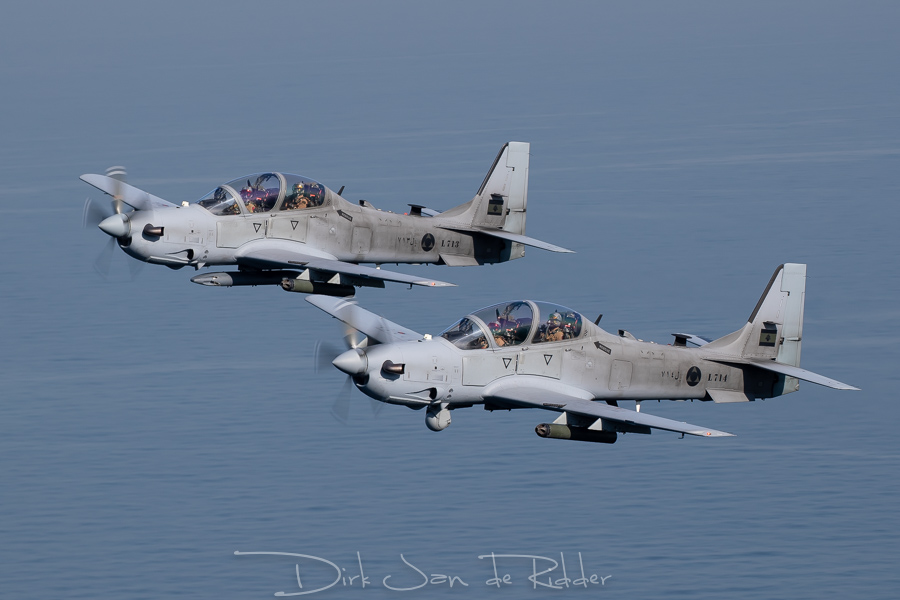 Lebanon is the first military user of The BAE Systems Advanced Precision Kill Weapon System on a turbo-prop aircraft. First delivered in February 2019, it fills a gap between relatively cheap unguided rockets and the expensive AGM-114 Hellfire missile. It is an add-on kit that turns unguided Hydra 70 2.75 inch rockets into laser-guided munition, making it an ideal weapon for striking both moving and static targets while reducing collateral damage. A-29 pilots can use the ‘plug-and-play’ system with minimal instruction as if they are launching unguided rockets.

Five hardpoints under the wing and fuselage allow up to 3,000 lb of weapons, including conventional or laser-guided bombs and AGM-114 Hellfire missiles to be mounted, or up to three external fuel tanks. The aircraft also features two .50 caliber machine guns with 200 rounds each. The Super Tucanos are able to operate out of all three military airbases in Lebanon, Beirut international airport and Baadaran airstrip in the deep south of the country, but even when operating from their home base they are able to reach any part of the country with some amount of playtime left, depending on the configuration. 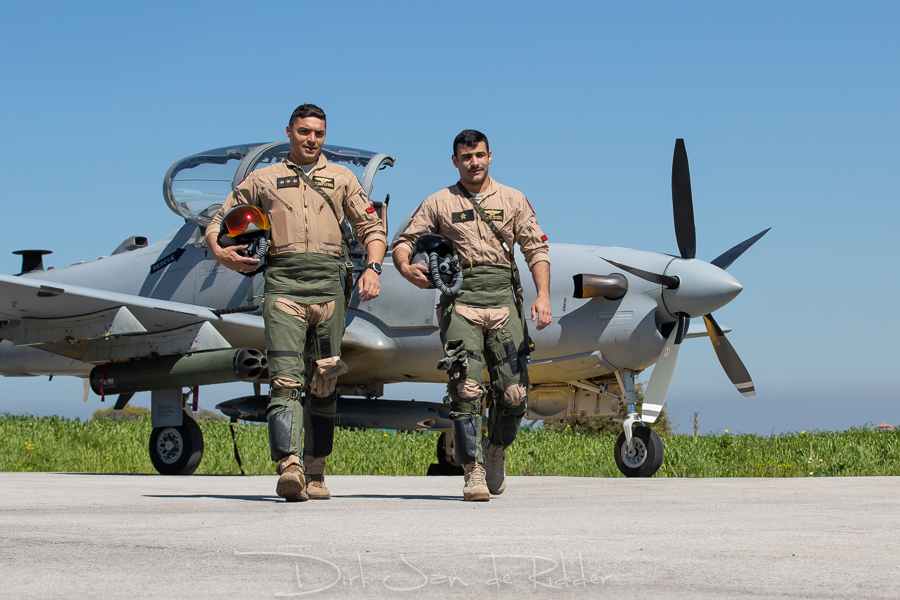 The Lebanese Air Force became the first air arm to operate the AC-208 Combat Caravan alongside the A-29. The Afghan Air Force will soon be the second. Tactics and procedures for the two aircraft to cooperate were developed in cooperation with an American air advisor. Although still lethally equipped with Hellfire missiles, the AC-208 has turned more into an ISTAR (Intelligence, Surveillance, Target Acquisition and Reconnaissance) platform. During the author’s visit, one night a Combat Caravan flew circles at a distance of a couple of miles around the live firing range located right next to the airbase. Its crew illuminated targets making them visible for the Super Tucano pilots with their night vision goggles.

This enabled a couple of pilots to drop their first weapons at night. They said doing it at night was actually easier than during daytime, because they were able to focus on the target while darkness hid all distractions around it. The squadron continued to fire their cannons and launch rockets for the remainder of the week in a live firing campaign, something they do twice a year. Another live firing range located in the mountains nearby is suitable for Hellfire missiles and live bombs. It is only accessible during summer when it is not covered in a thick layer of snow.

The Lebanese government is now looking to buy another two A-29s very soon, with another two to four to hopefully follow after that. Meanwhile, the airbase is continuing to be further modernized. Its single runway will be joined by a parallel taxi track so that fixed-wing aircraft won’t have to taxi over the runway prior to and after landing. A second ramp will be built to separate the Super Tucanos from the helicopters. Also, soon a batch of six MD530G scout-attack helicopters will be delivered to Lebanon. No one was willing to confirm whether they would be based at Hamat, but looking at the weapons storage facilities, the base’s expansion plans and the live firing range at a mere minute’s flight time from the airbase, it would be conceivable to see them being based here.

In very short time, the airbase will have transformed from an airfield that was only suitable for helicopter operations into the Lebanese Air Force’s primary airbase for attack aircraft. Lebanon has seen peace since a few months before the Super Tucanos arrived, but sadly, in a country like Lebanon the next conflict is never far away. It is now up to 7 Squadron to be prepared for the worst and hope for the best.