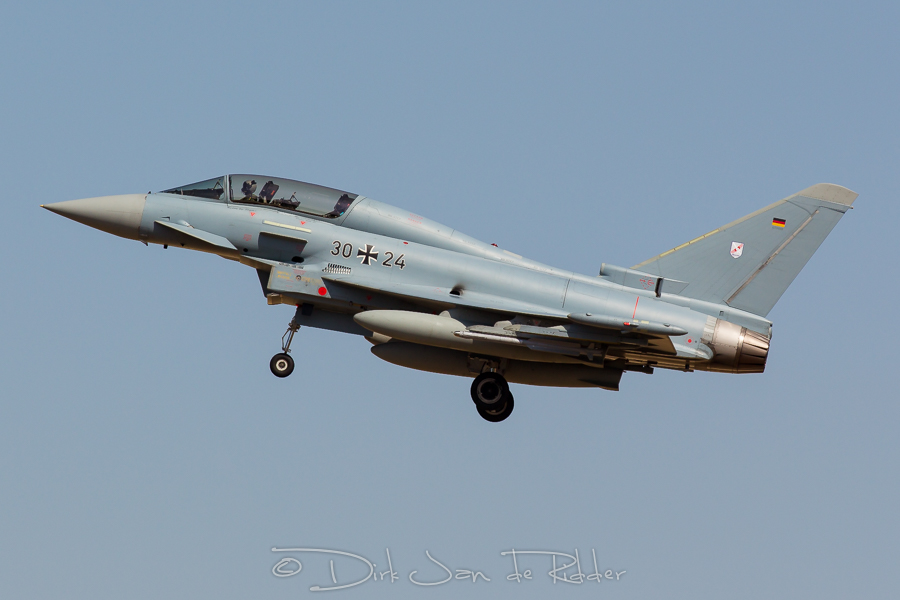 Jagdbombergeschwader 31 (JBG 31) was the Luftwaffe’s first fighter wing to receive the Panavia Tornado, when it retired its Starfighters in 1983. Nearly 30 years later, the Tornado still forms the backbone of the fighter bomber fleet, but the end is near. JBG 31 became the first fighter bomber wing to transition to the Eurofighter in December 2009 and the Luftwaffe is scrapping Tornados for spare parts at rapid tempo to have 85 jets left airworthy past 2015. The Eurofighter will then become the Luftwaffe’s primary fighter jet. A training wing at Laage (JG 73) and a fighter wing at Neuburg (JG 74) already preceded JBG 31 in transitioning to the multi-role aircraft, and Wittmund will follow as the fourth and final Eurofighter base.

Deputy commander of JBG 31, lieutenant colonel Stefan Kleinheyer, is very experienced with the Eurofighter. After flying the F-4F Phantom for some 10 years, as well as the F-16C for three years in the United States, he became the first commanding officer of the Luftwaffe’s first Eurofighter squadron (732 Staffel at Laage) in 2003. When I asked him about the role of JBG 31 in relation to other Eurofighter wings, he commented: “One of the objectives of the air chief of staff is that all Eurofighter wings will be able to do both air-to-air and air-to-ground. The aim is that there will not even be wings focusing a bit more on one specific role. All wings are going to be multi-role, but this wing will be the leading unit to set the standards for air-to-ground, to do the testing and evaluation, because we have pilots with that background.”

As the first fighter bomber wing to convert to the Eurofighter, the transition went a little different when compared to other units. Kleinheyer: “Any pilot with more than seven years of flying left, would be transferred to the Eurofighter. All the others kept flying the Tornado here at Nörvenich until 2009, and from then on they were stationed here for their function, while flying the Tornado out of Büchel. As for our pilots, some 70% are former Tornado pilots, but they are trained in the air-to-air role as 90% of the missions we fly at the moment are air-to-air. Then we have another 30% of the pilots with a Phantom background, who are familiar with AMRAAM employment. This is a great mix for us. Some of them are also instructor pilots, so they take care that we have a good level of understanding of the air-to-air role before we carry on to the air-to-ground business.” 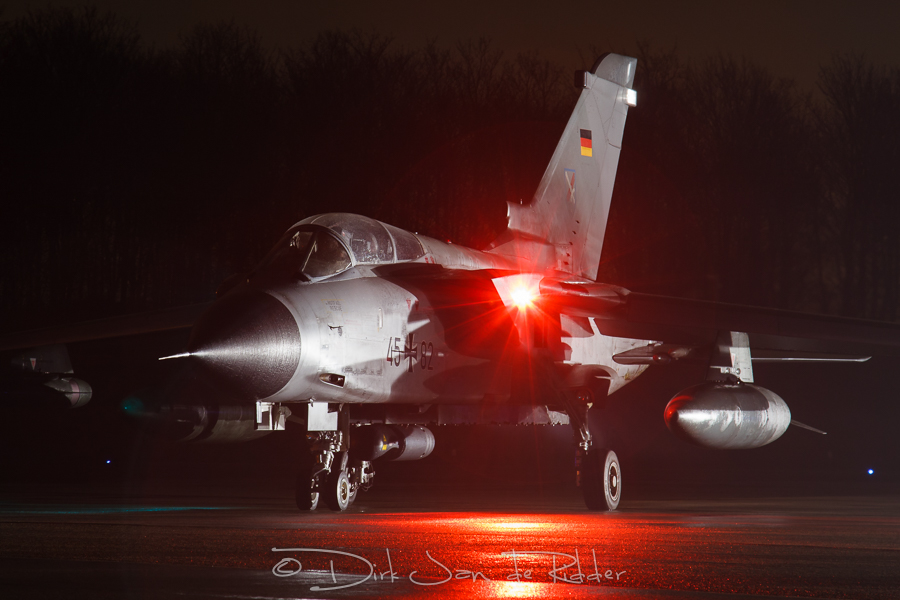 Eurofighter Typhoons are delivered to partner nations in three instalments: Tranche 1, 2 and 3. By March 2008, 44 Tranche 1 aircraft had been delivered to the Luftwaffe. Eurofighters currently rolling off the production line are Tranche 2 versions, of which 79 will be delivered by 2014. The latest batch of Tranche 3 jets will comprise 31 aircraft for the Luftwaffe. JBG 31 currently operates both Tranche 1 and Tranche 2 jets, as lieutenant colonel Kleinheyer explains: “We have Tranche 1 and 2 here on the base and there are many differences for the technicians, but for me as a pilot those differences are less important. For example, we are now using the Tranche 1 to join the NATO Response Force [at Jagdgeschwader 74], because they have got some better software upgrades than the Tranche 2. As a pilot going to the flightline however, and sitting in a Tranche 1 or 2 those differences are minor. There are differences when it comes to the Defensive Aids Sub System, our chaff/flare and ECM. It is better integrated in the 2 than in the 1.”

“When we have a basic air-to-ground capability with upgraded Tranche 2 aircraft, including the laser designator pod, than that would already give us the capability to fight our way through with AMRAAM and a very good air-to-air posture, and to lase [targets] or even drop [bombs] on GPS coordinates. I haven’t seen a Tranche 3 yet, but when it comes to sensor fusion and systems like our helmet-mounted sight, which we are already testing here on the base, I expect the integration of all these systems to be even better.” 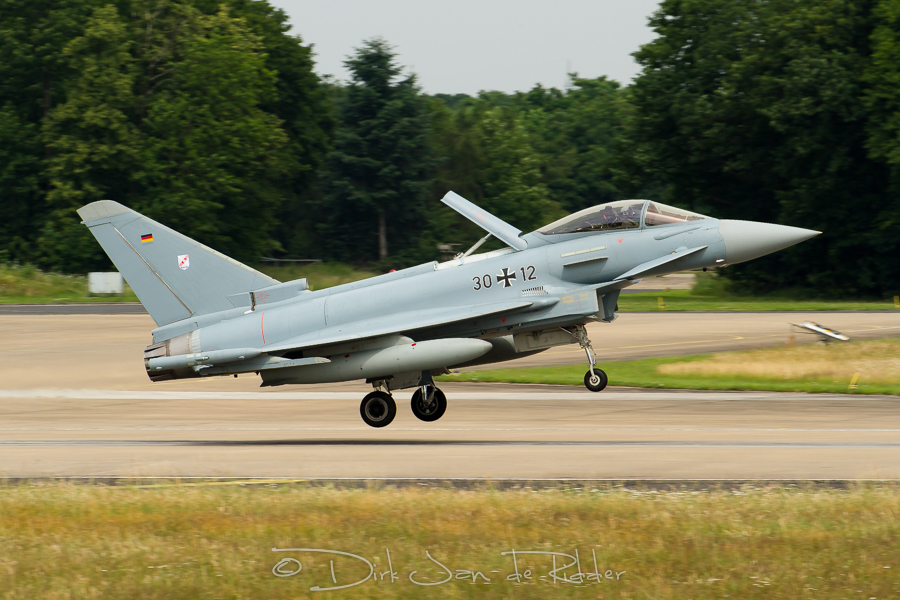 The Eurofighter’s main air-to-ground weapon for all-weather precision attacks will be the 1,000 lb (450kg) GBU-48, consisting of a Mark 83 bomb with an explosive mass of 440 lb (200kg). It is to be guided by GPS or laser from the Litening III laser designator pod. Both the Mark 83 and the Litening targeting pod are already in use with the Luftwaffe’s Tornados, but they have yet to be integrated into the Eurofighter fleet. The Luftwaffe plans to modify the GBU-48 with a Trojan Improved Penetrator (TIP), which combines increased penetration with reduced explosive power to minimize collateral damage. Air-to-air capabilities are going to improve with the arrival of the MBDA Meteor. This beyond visual range missile will replace the AIM-120B AMRAAM, effectively increasing the attack range from 45 miles (75 km) to 60+ miles (100+ km).

Eurofighters will also be used as manned reconnaissance platforms through the use of the RecceLite pod. The Luftwaffe has not yet set a date for its introduction, but it has stated that it will follow Meteor introduction. As the Eurofighter comes of age, more and more weapon systems, such as the MBDA Brimstone anti-tank missile, AGM-88 anti-radiation missile and Taurus air-launched cruise missile will become available for the aircraft. It seems very probable that the Luftwaffe will equip its primary fighter jet with these missiles, the latter two of which are in use with the Tornado, although JBG 31 staff could not confirm the future use of any other air-to-ground weapon but the GBU-48. 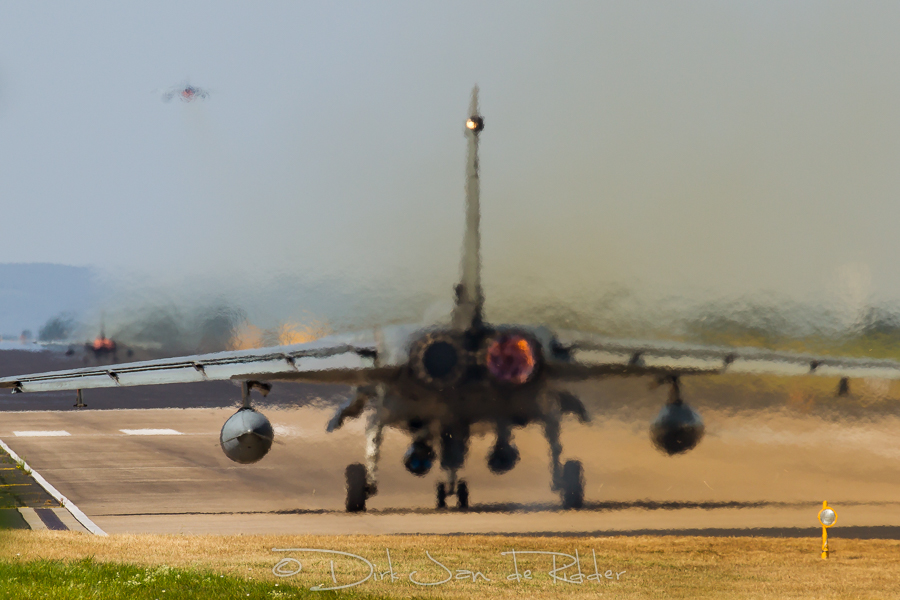 One of the aircraft types to be replaced by the Eurofighter, the F-4F Phantom, will retire at the end of June 2013. The Luftwaffe has stated that it wants to keep a fighter jet presence in northern Germany, so JBG 31 will take over the QRA role with a detachment to Wittmund starting on 1 July. Personnel belonging to Jagdgeschwader 71 will then be brought under JBG 31 command. They will be trained to maintain and work with the Eurofighter in the mean time, but seasoned personnel from Nörvenich will also be there to make sure the mission is going to be a success. Four aircraft, including two backups, are needed to guarantee the QRA mission, and two or three additional aircraft will be based at Wittmund to make sure there is always a spare.

Pilots sitting QRA usually work three subsequent 24-hour shifts with a 24-hour break in between each shift, so they don’t have to travel 4 hours by car for a single QRA shift. This will be the Luftwaffe’s first long-term QRA deployment without a real end date, so the exact working schedules are still being worked on. Another option under investigation is to fly QRA from Nörvenich, which as a backup nuclear base has all the necessary facilities. There will not be any local training flights at Wittmund, although the Luftwaffe is known to practice ‘tango scrambles’ at least once every day. Jagdgeschwader 71 will eventually get its own Eurofighters during the second half of this decade. By that time, the Eurofighter will have grown into a mature aircraft and Boelcke’s bomber pilots will have set the standards for all Eurofighter wings to become proficient in the air-to-ground role.

Apache Solo Display Team
No one behind