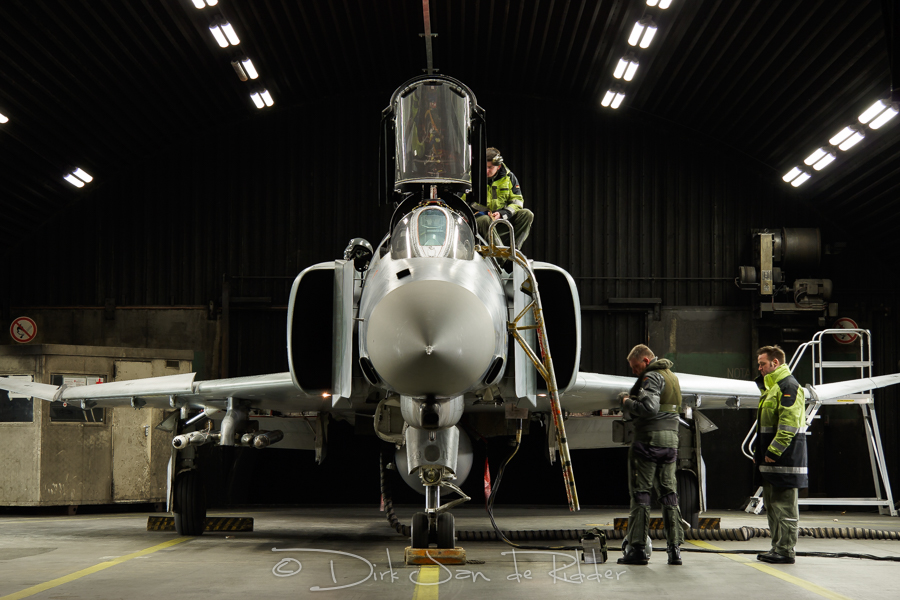 Some 35 years after introduction into the Luftwaffe the McDonnell Douglas F-4F Phantom is still in service with Jagdgeschwader 71 ‘Richthofen’ (JG71, fighter wing 71). The end is near, but Phantom operations are still going strong as ever, as lieutenant colonel Gerhard Roubal told me.

For the second consecutive year JG71 was Luftwaffe’s record-holding fighter wing in terms of flying activity, totalling over 7600 flying hours in 2007. With an operational deployment to Lithuania, participation to several exercises in Europe and even the United States, plus a 24/7 readiness to intercept unidentified aircraft over Germany, odds are that the fighter wing is not going to hand over that position for at least another year. 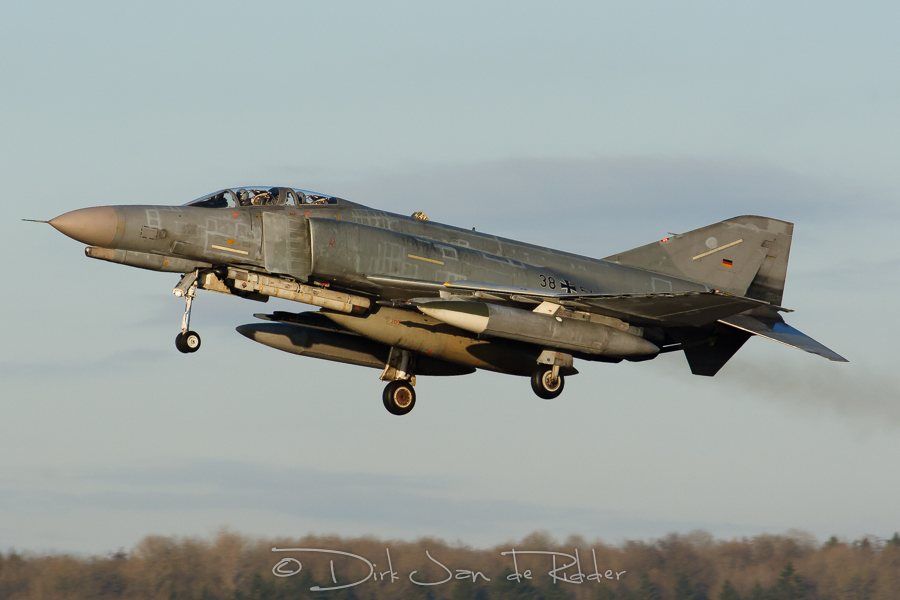 Lieutenant colonel Gerhard Roubal is the deputy commander of Jagdgeschwader 71. He has logged 2200 flying hours, of which over 2000 in the F-4F Phantom as a weapon systems operator. He explains some of the shortcomings of the Phantom: “Regarding avionics, radar and weaponry the Phantom is still competitive to modern jets. The main deficiencies of the F-4 are in close range. In a dogfight with an F-4 against a Eurofighter, the results are pretty predictable, but it would be bad if it was otherwise. If we could cope against a Eurofighter something would be significantly wrong with the conception of that aircraft. Another deficiency is the lack of a data link capability, which is very practical in complex international operations, but for our main task of air policing we don’t really need it.”

The Phantoms are kept operational principally to fulfill the QRA interception role. Roubal explains: “We keep two aircraft on a 15-minute alert state. They are armed with an M61A Vulcan 20mm cannon, which can fire up to 6000 rounds per minute, and two Sidewinder missiles. When the alarm bell rings, pilots must be airborne within 15 minutes, but normally it would only take 8 to 10 minutes. We practice three tango scrambles (training scrambles) a day to keep the whole chain of alert ‘in shape’. Nine out of ten cases an alpha scramble (real scramble) requires visual identification of an aircraft due to comloss (communications loss). Last year we had 13 alpha scrambles, in the first two months of 2008 we already had four.”

JG71 shares the QRA interception role with JG74, which is currently completing conversion to the Eurofighter. Both wings provide QRA 24 hours a day, 365 (or 366) days a year. Depending on the situation the division line is roughly Frankfurt-Berlin, with JG74 protecting southern Germany and JG71 the northern part. Laage will also receive QRA infrastructure, but it remains unclear whether JG73, the Eurofighter conversion unit there, will fulfill any QRA duties in the future. It might be possible that other units will take over the QRA role for certain time periods when the Luftwaffe has taken delivery of all Eurofighters, but definitely not in the next few years. 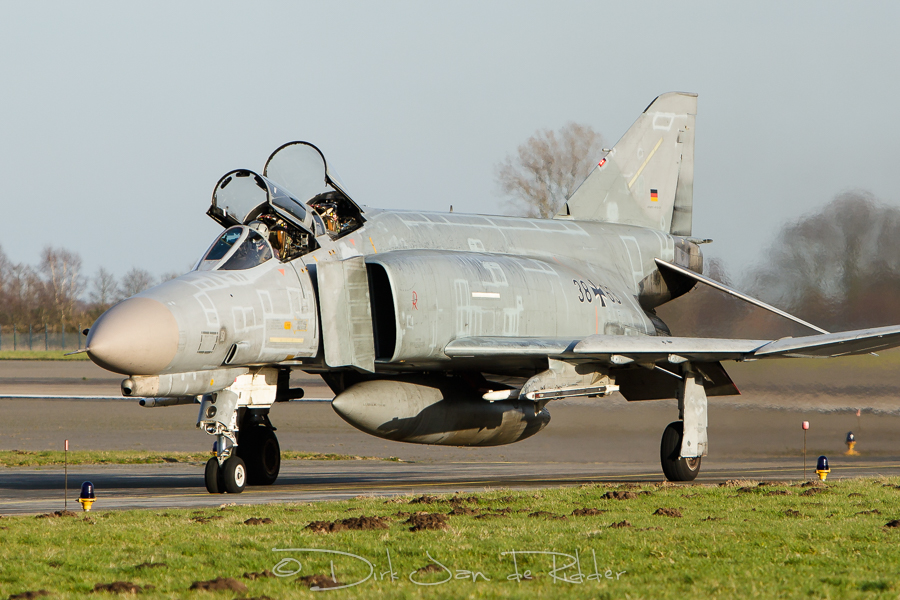 Roubal clarifies the cooperation between both crews on a combat mission: “The allocation of tasks between the front and the backseat cannot be divided very strictly, it has dependencies. If you go through a normal air-to-air engagement it starts pretty far out. After you get an early warning, for example by an AWACS aircraft, you go beyond visual range with your own radar and that’s done by the backseater. He is trained to operate the radar and to do the whole battle management. In close fights the responsibility shifts completely to the frontseat. There is a transition phase just prior to reaching the visual arena.”

“The F-4 is a very thirsty aircraft. Its first flight was in 1958, when fuel efficiency was not a question. Therefore air-to-air refueling is a must-have, especially when we deploy overseas. It is also a big force multiplier, for example when we have to have aircraft airborne on combat air patrol for a certain period of time. That is what we train for on a regular basis, but we depend on US support. We have a tanker slot for training roughly once every two weeks, often with a KC-135 out of Mildenhall.” 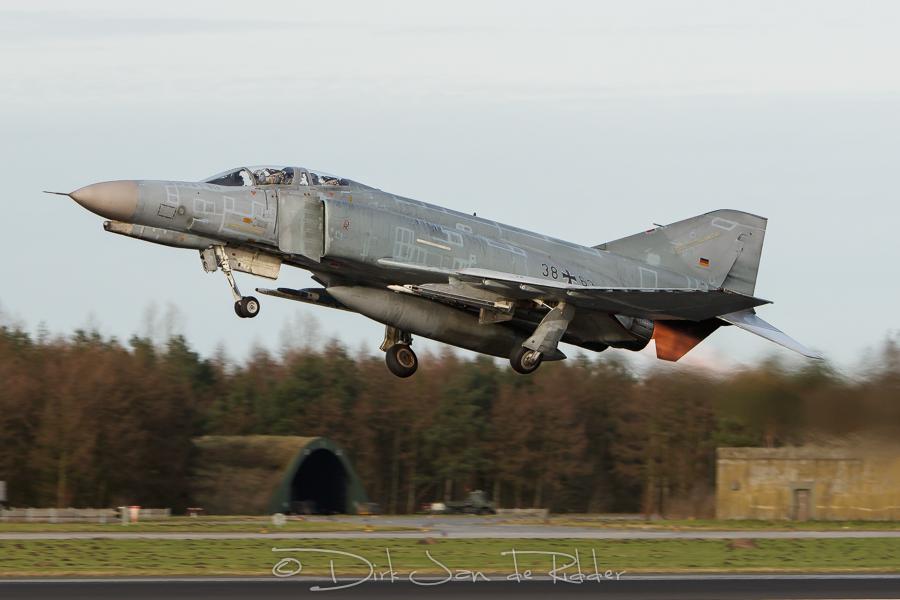 Luftwaffe Phantoms are frequent guests at the Tactical Leadership Programme and other exercises all over Europe. ”Normally we take six aircraft and about a hundred people, so that we can maintain full flight operations at home. Such exercises often have 40 to 60 aircraft flying composite air operations (comao’s), always red air against blue air, which are crucial to keep our pilots combat-ready in complex scenarios. We cannot provide 20 aircraft ourselves for comao’s so we depend on such large exercises.”

In 2010 JG71 will receive its first Eurofighters. The wing will be flying a mixed fleet for one to two years and ultimately in 2012 the Phantom will be completely withdrawn from use.