Switzerland bought 72 F-5 Tigers in 1976 and another 38 in 1981, for a total of 98 F-5E single-seaters and 12 F-5F dual-seat trainers. Over thirty years and 250,000 flight hours later, 44 have been sold to the United States Navy and nine were written off in accidents. Some 54 remain in service, but not for long as -like the Swiss Air Force explained it to the public- “an old tiger does not jump anymore, it stays on the ground”.

In January 2008 the country started searching for a replacement aircraft in the Tiger-Teilersatz (TTE, partial Tiger replacement) program. Three frontline squadrons are to be equipped with the new fighter jet, while a training squadron (disbanded in 2008) and Patrouille Suisse (facing an unsure future) are not. Switzerland is Europe’s last country to have active duty squadrons equipped with the F-5. Only Spain still operates some F-5B Freedom Fighters (the earlier, slightly smaller and less powerful F-5 variant), but only for training purposes. The Swiss Air Force received its first F-5s at the end of the seventies to replace the De Havilland Venom and to fill a gap caused by increased use of the Hawker Hunter for ground attack. Ever since the first aircraft were delivered, they served very well. With its high reliability, ease of maintenance and low operating costs, the aircraft are especially well suited for the militia system.

Militia pilots are part-time pilots flying at least once every four weeks and minimally 50 hours a year (against 150 hours for a Hornet pilot), spread over an intensive 3-week Wiederholungskurs (WK, repetition course), a 5-day Trainingskurs (TK, training course) and several training flights independent of squadron activity. Most individual training flights are ‘red air’ missions, playing the bad guys against Hornet pilots. Besides being an air force pilot they have a regular job, often as a commercial pilot, but also non-aviation related. Currently about 90% of all F-5 pilots are militia pilots. All fighter pilots now joining the air force become full-time Hornet pilots, so the F-5 will be the last jet to be flown by militia pilots.

As of 2010, the Swiss Air Force’s Tiger fleet comprises 42 F-5Es and 12 F-5Fs. They are flown by three frontline squadrons (Fliegerstaffel 6, 8 and 19 at Payerne, Meiringen and Sion respectively) and by the Patrouille Suisse display team which is based at Emmen. Apart from weeks when TK and WK exercises are held, flying activity at Sion and Meiringen is often very low. This is partly due to noise abatement, but also because of the nature of the militia system. Except from the Patrouille Suisse’s aircraft, the F-5s are not allocated to a specific squadron. Whenever needed, they deploy to Emmen, Meiringen or Sion, but most flights take place from Payerne regardless of the pilot’s squadron or home base. In fact, Payerne is where over 50% of all jet activity takes place.

While the operational F-5 squadrons don’t deploy abroad anymore, the Tigers of the Patrouille Suisse are regularly found at airshows throughout Europe. The team has been flying the F-5E from 1995. All members are active duty Hornet pilots, flying the F-5 part time with the Patrouille Suisse. With the retirement of the Tiger in a few years, the future of the team looks uncertain, as the new fighter will be too expensive for formation demonstration flights. In December 2009, Chief of the Armed Forces André Blattmann said the Tiger may continue to fly until the end of the decade and Patrouille Suisse will fly the F-5 for the same period. Rumours suggest the team may merge with PC-7 Team after that.

The F-5’s main roles are air defence and air policing. Unlike its surrounding NATO countries, Switzerland does not maintain permanent Quick Reaction Alert (QRA) interception cover. The air space is monitored by radar 24 hours a day 365 days a year, but air defence is only provided during office hours on weekdays. It is only on special occasions (such as the annual World Economic Forum in Davos) and in times of crisis that 24/7 QRA is installed. During the World Economic Forum at least one pair of Hornets is always airborne at any given moment, fully armed and ready to intercept incoming aircraft. During this period the Tigers are assigned to air policing as well.

A Wiederholungskurs is normally organised to make sure enough F-5 pilots are available during the event. Also when the volcanic ash cloud from Iceland recently halted flying operations over large parts of Europe including Switzerland, QRA aircraft were put on alert to intercept any aircraft ignoring the flight prohibition, but such a readiness state is only provided by the Hornet squadrons. Switzerland’s maximum extension (from East to West), is less than 220 miles (350 km), which is traversed by airliners in less than 20 minutes, leaving little time for fighters to get airborne and intercept their target anyway. Good agreements with neighbouring countries make it possible that QRA is not maintained 24 hours a day. 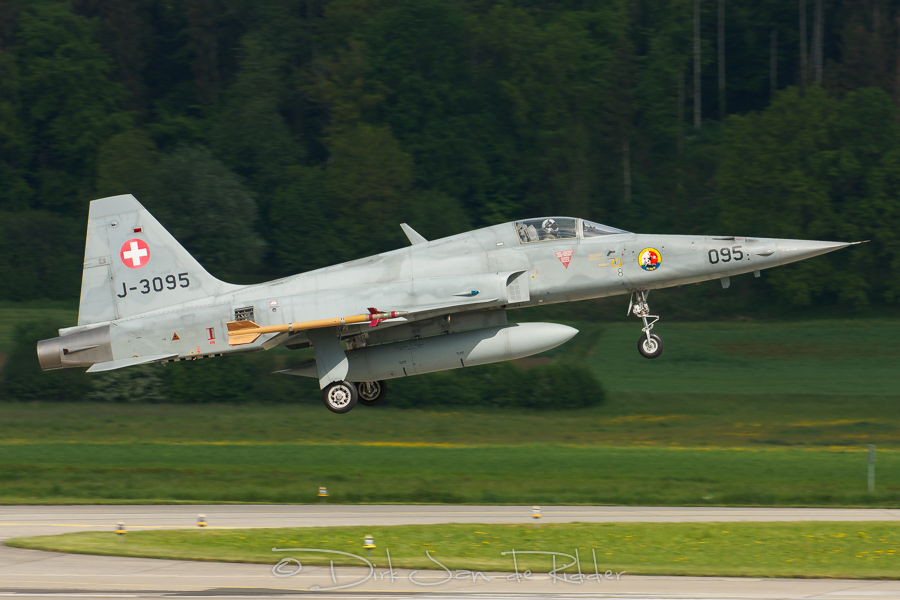 While the F-5 is limited to air defence roles, its replacement will also have to fulfil the ground attack and reconnaissance role. Both are not currently carried out by the Swiss Air Force. When the Mirage III RS was retired in 2004, a gap was created in the Swiss Air Force’s reconnaissance capability which is to be filled again by the Tiger replacement. The ground attack role was given up as long ago as in 1994, when the Hunter was withdrawn from use. Regardless of these newly introduced capabilities an F-5 replacement is urgently needed, as the jets are increasingly affected by cracks and corrosion.

Apart from that it is especially in terms of capabilities that the F-5 is getting very outdated. Captain Martin Hess, a pilot currently flying the F/A-18 but with previous experience on the F-5, explains: “The days of winning a fight in the F-5 against an F/A-18 are over. The F-5’s radar is looking forward for a couple of miles and that’s it. It has a display with a cross in the front and the pilot has to bring the other aircraft into that cross to be able to fire a missile. With the F/A-18 we are much better equipped. The Joint Helmet-Mounted Cueing System enables us to shoot around the corner. If we can see an aircraft, we can shoot it down from that angle. The F-5’s only advantage is its small size. their pilots play a lot with their visibility and with radar tactics. But still 99% of all fights are won by the Hornet.”

He continues about daily flight operations: ”Normally we train F/A-18 against the F-5. This helps us to distinguish blue air from red air. The F-5 has a single tail fin whereas the Hornet has a double one, but still during a fight it is quite difficult to see that. We therefore often equip F-5s with orange fuel tanks and missiles to identify them as part of red air, so we don’t have blue air shooting other blue air jets. Generally, we only fly F/A-18 versus F/A-18 in Beyond Visual Range combats.”

The F-5 is only flown during daytime. It is not an easy aircraft to fly at night, over the mountains and through difficult weather, mainly due to a lack of situational awareness (especially compared to the Hornet with its excellent radar, Night Vision Goggles and Joint Helmet Mounted Cueing System). This leaves a fleet of only 33 Hornets to perform nocturnal air policing missions during events like WEF. Without replacing the F-5, the Hornets would only be able to fulfil around the clock air policing, with four fighters airborne at any given moment, for two consecutive weeks. Early in the evaluation process when there was still a requirement for 33 new jets, research revealed that these 33 new fighters and the Hornet fleet would enable the Swiss Air Force to continue 24/7 air policing for up to seven weeks in a row. Later the requirement was reduced to 22 new jets, mainly for financial reasons.

The F-5 Tiger also performs a number of secondary roles, including electronic combat training and target towing. Both of these roles are -again- in support of F/A-18 training flights. The F-5 is even used to collect data about radio-activity at high altitudes for the Federal Office of Public Health. Carrying two pods with high-altitude air filters six flights are normally scheduled each year. In April 2010 four additional flights were made to research the volcanic ash cloud that paralysed European air traffic. In comparison to the Hornet, the Tiger is a very cost-efficient asset which makes them ideal to fly these secondary missions. Another advantage is that F-5s are typically flown by militia pilots, so full-time pilots can focus their attention on combat roles. 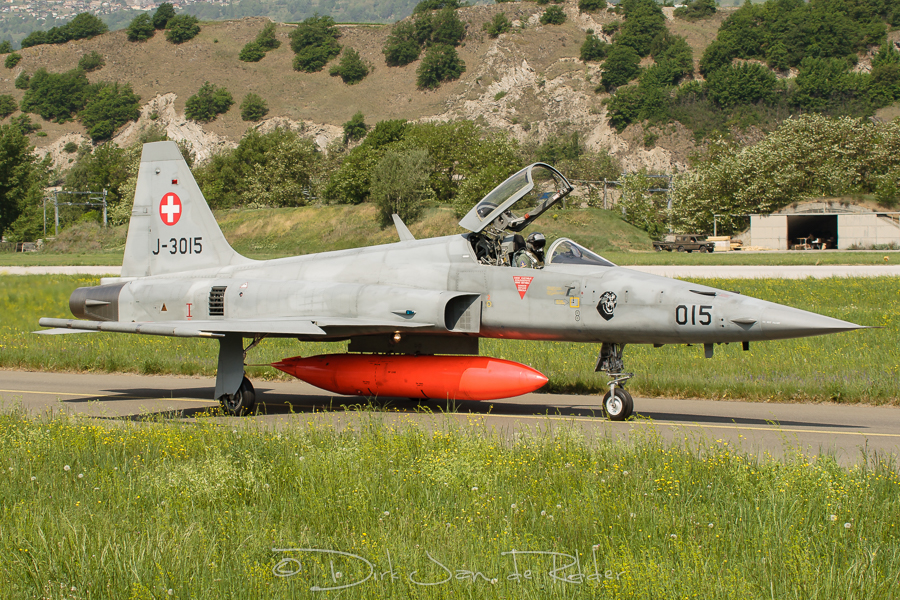 In 2006, four candidates to replace the F-5 were selected for evaluation: the Boeing F/A-18E/F Super Hornet, Dassault Rafale, Eurofighter EF2000 Typhoon and Saab JAS-39 Gripen. In April 2008 Boeing surprisingly withdrew its Super Hornet from the competition due to a ‘gap between the requirements for an F-5 replacement and the next-generation capabilities of the F/A-18E/F Super Hornet Block II’. The remaining three candidates submitted their proposals and were test flown from Emmen airbase in August (Gripen), October (Rafale) and November (Eurofighter) of that same year, with each manufacturer sending two double-seat aircraft.

Before these flight evaluations could take place no less than six pilots, consisting of two test pilots from Armasuisse (Switzerland’s arms procurement organization), two general staff pilots and two active duty Hornet pilots, were all sent to France, Germany and Sweden for a week of instructions on the aircraft they would fly. Such a week typically contained long days of class room briefings, flight simulator rides and a single day to visit a squadron operating the aircraft. Back in Switzerland all six pilots flew sorties in all three candidates, in each case assisted by a manufacturer pilot in the backseat. The test program included a familiarization flight for each pilot, 1-on-1 dogfights, aerial combats with two ‘TTE candidates’ and two Hornets against other Swiss jets, ground attack and reconnaissance sorties, supersonic flights, night operations and noise measurements at Emmen and Meiringen.

The Gripens accumulated 30 flights (35 flying hours), the Typhoons 31 flights (45 hours), while the Rafales totalled as much as 39 flights (60 hours) due to tests with different radar systems. After the flight evaluation was completed all companies were asked to send two final proposals, one with the budget limited to 2.2 billion Swiss Francs (1.5 billion Euros) and another for 22 aircraft. The results of the evaluation were presented to the government, which then had to take the definite decision. Due to the financial situation, in April of this year it was decided to postpone the decision until autumn, when a new security analysis for the armed forces will be presented. The decision about replacing the F-5 will be based on the outcome of this analysis.

Initial Operational Capability (IOC) of the first squadron was originally planned for late 2014. This is likely to be delayed, as a consequence of the government’s decision to delay the replacement. Recently Air Force commander lieutenant general Markus Gygax clearly pointed out that retiring the F-5 without replacement is not an option by saying new fighter jets must be flying over Switzerland by 2020. Whatever happens, Switzerland will retire its last ‘classic’ jets by the end of this decade, but in terms of capabilities it will be an important leap forward without doubt.