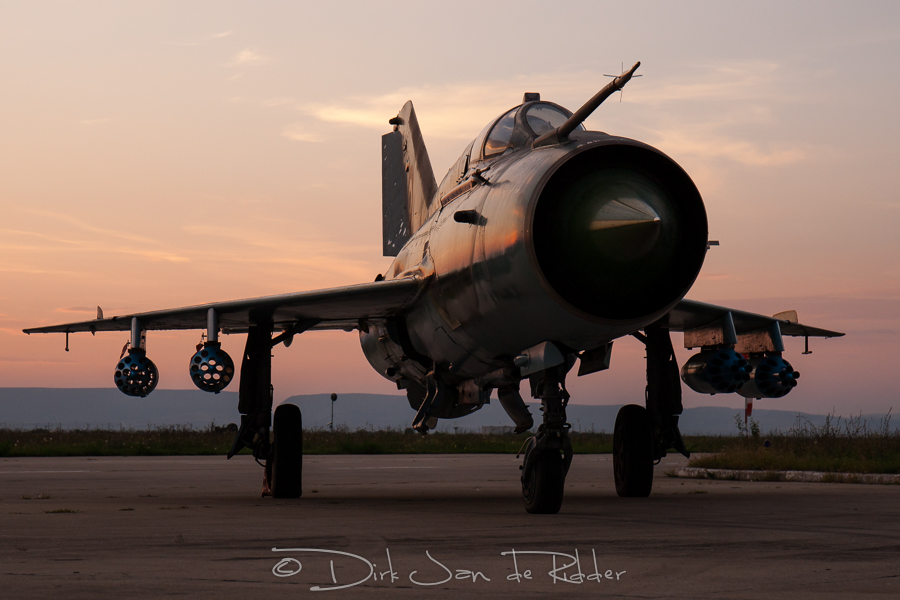 Pending the arrival of its first F-16 Fighting Falcons in the second half of 2016, the Romanian Air Force is at the dawn of MiG-21 operations.

How times must have changed in the Romanian Air Force since the breakup of the Soviet Union. Once a Warsaw Pact member state, although with more independence than some other states, the air force was left operating a large amount of MiG-21 Fishbeds, as well as MiG-23 Floggers and MiG-29 Fulcrums in the 1990s. A failed attempt to upgrade the MiG-29s, and the retirement of the MiG-23 in 2000, led the Romanians to upgrade 112 MiG-21 Fishbeds to MiG-21 LanceRs from 1995. The air force has relied on the MiG-21 as its only fighter jet since 2003, when the MiG-29 was withdrawn from use.

About two-thirds of the MiG-21s in the LanceR program -73 aircraft- became single-seat LanceR A ground attack variants. In terms of avionics, the two-seat LanceR B is similar to the LanceR A. It is used for training and has a secondary air-to-ground capability although it doesn’t have an internal gun. Equipped with the Israeli Elta EL/M 2032 pulse doppler radar, the single-seat LanceR C was designed for the air defence role. It is easily distinguished from the other two variants by its white and grey camouflage scheme. The LanceR C has a secondary ground attack role, but even now that the LanceR A has been retired the former are rarely seen with air-to-ground armament.

The LanceR upgrade program converted the jets into what is probably the most capable MiG-21 variant to have ever flown. In fact, the LanceR became the world’s first operational aircraft to make use of a Helmet Mounted Display System, enabling pilots to aim a missile at a target simply by moving their head. They were also the first aircraft capable of firing both Eastern and Western armament, including French Magic and Israeli Python III air-to-air missiles, American Mk82 and Mk83 ‘dumb’ bombs, Israeli Lizard laser-guided bombs and the Russian S-24 rocket. 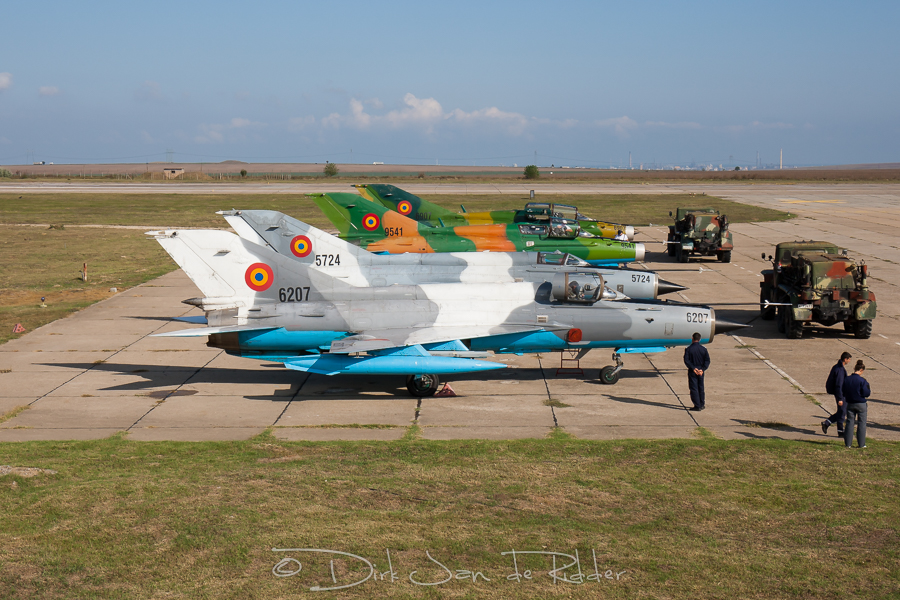 It has been 20 years since the MiG-21 LanceR prototype first flew. TheLanceRs are split between Baza 71 Câmpia Turzii in the northwest and Baza 86 Feteşti near the Black Sea coast. MiG-21 training operations at Baza 95 Bacau came to an end when the LanceR A ground attack version was withdrawn from service. Despite a considerable reduction of its MiG-21 fleet in recent years, the Romanian Air Force remains Europe’s largest MiG-21 operator. Some 20 LanceR C multi-role variants remain airworthy, as well as about 8 LanceR B double seaters for training. 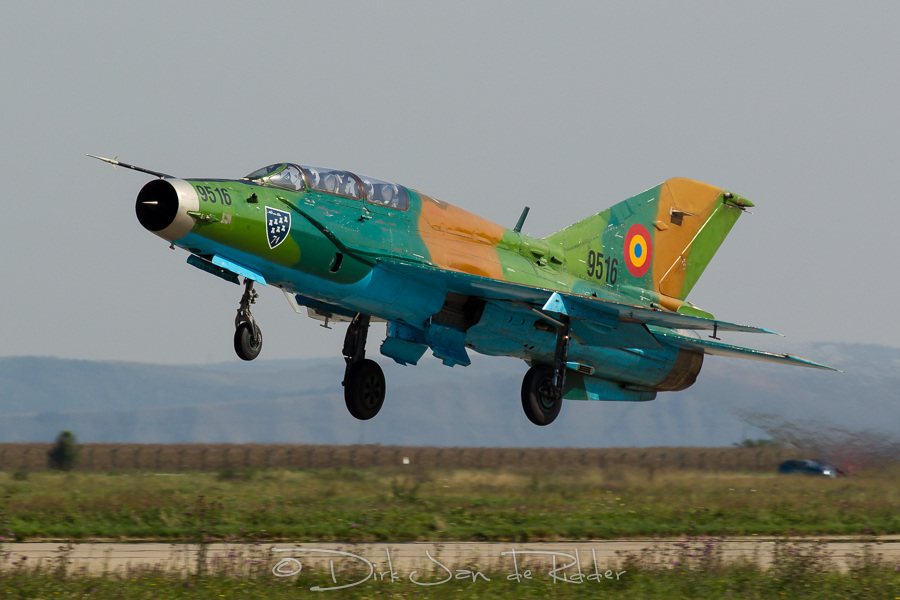 LanceR pilots seem to focus on air-to-air sorties, especially taking in mind the limited amount of airframes still available and the recent increase in military air activity along NATO’s border. On a few occasions, Russian Air Force Il-20 Coot intelligence gathering aircraft -and even some Su-27 Flankers- have been intercepted over the Black Sea. Due to its very short start-up time the MiG-21 is very suitable for the quick reaction alert role, although its lack of endurance is far from impressive. Tactics applied by LanceR pilots in aerial combats therefore mainly comprise using the jet’s small size to their advantage and operating in ‘hit-and-run’ style.

Sorties generally last between 30 and 40 minutes due to the MiG-21’s lack of endurance. On the positive side, this allows pilots to fly nearly every day and still get near the NATO standard of 150 flying hours. Allegedly it is especially the higher ranking pilots that seem to fly more often. Pilot salaries are partly based on their amount of flying hours each month, so they prefer to reserve them for themselves.

Fighter jets from the Portuguese Air Force (F-16), Royal Canadian Air Force (CF-188) and the United States (A-10, F-15, F-16) have recently deployed to Romania to train with and against the MiG-21. Apart from so-called ‘reassurance measures’ they trained intercept procedures and flew air-to-air combat sorties together. Amid increasing tensions in the region -no other NATO country is located closer to Crimea- Romania increased its defence spending in 2015 to 2.6 billion euro (1.7% of gross domestic product) and the Romanian parliament even pledged to increase that to at least 2% of GDP by 2017. 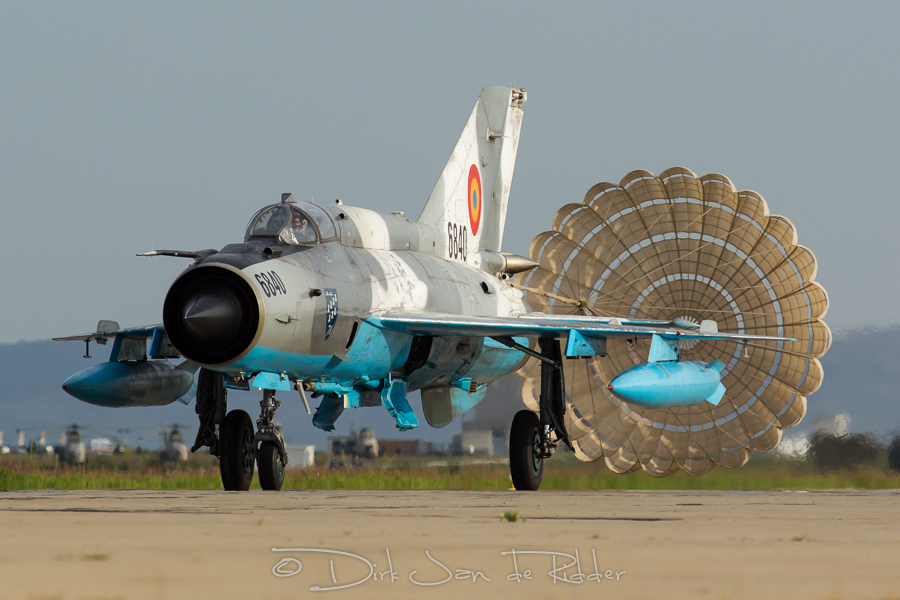 In October 2013 Romania decided to buy 12 second-hand F-16 Fighting Falcons from Portugal to partially replace its MiG-21 LanceRs. These will include nine F-16AM single seaters and three F-16BM double seaters. Many of these acquired very few flying hours with the Portuguese Air Force since their Mid-Life Update and three airframes even still have to be upgraded in Portugal. These three, comprising two F-16As and one F-16B, will be taken from AMARG in the United States and upgraded to MLU standard in Portugal.

The 638 million euro contract, of which 120 million euro for the acquisition of the aircraft, includes modifications and upgrades by Lockheed Martin, spare engines, logistics support and the training of 9 Romanian pilots and 69 maintenance technicians. Additional systems to be delivered will include three AN/ALQ-131 ECM (electronic countermeasure) pods, 30 long-range AIM-120C AMRAAM, 60 short-range AIM-9M Sidewinder and 18 AGM-65H/KB maverick missiles, as well as 10 GBU-12 Guided Bomb Units.

In June of 2015 Romania announced the purchase of another twelve second-hand F-16s from the United States. They will be upgraded in Portugal as well and delivered later. The former Portuguese Air Force F-16s are expected to arrive in 2016 and Initial Operational Capability (IOC) will be achieved in 2017. MiG-21s are expected to continue to fly at Câmpia Turzii until the second batch of F-16s has been delivered.